Monkey Mia and the Dolphins

We drove from Steep Point to Monkey Mia and it was long day in the car when we arrived at the Resort…we checked into the Monkey Mia Caravan Park that was full and we were allocated the overflow camp near the front gate which turned out to be more roomy than most of the sites in the park a lucky bonus and they let us stay here two nights. 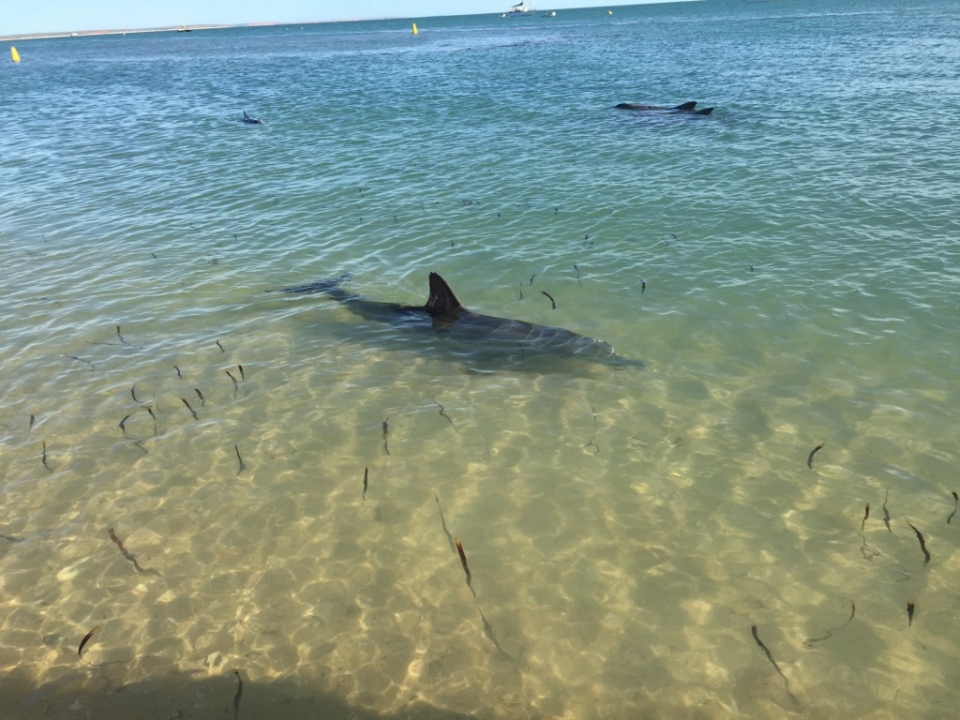 Dolphins happily swim by and check out the crowd 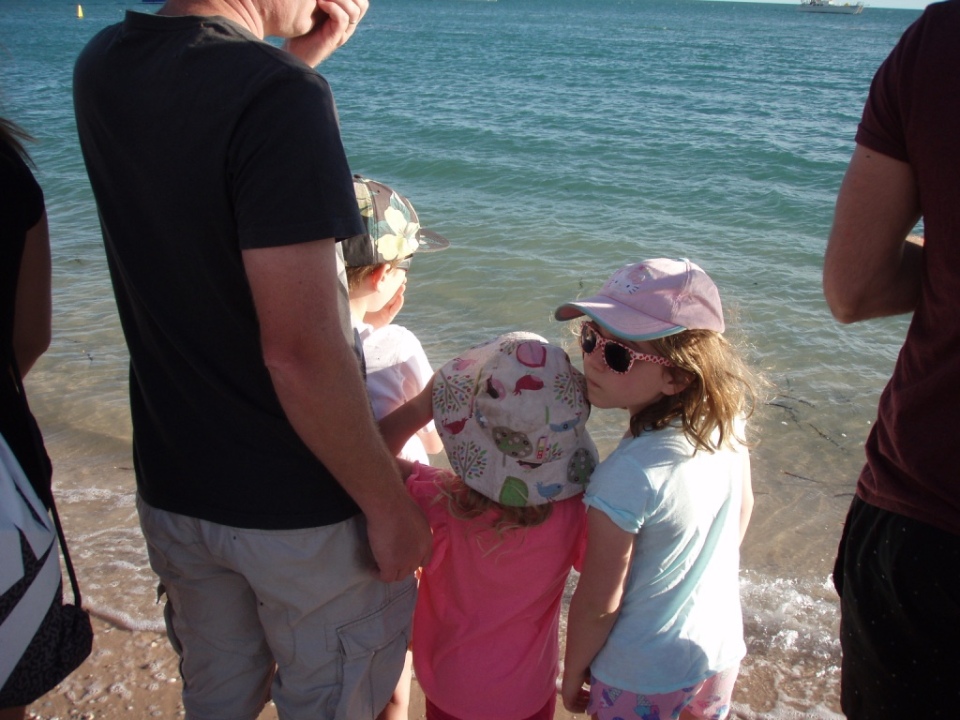 Looking at the dolphins in the beach line 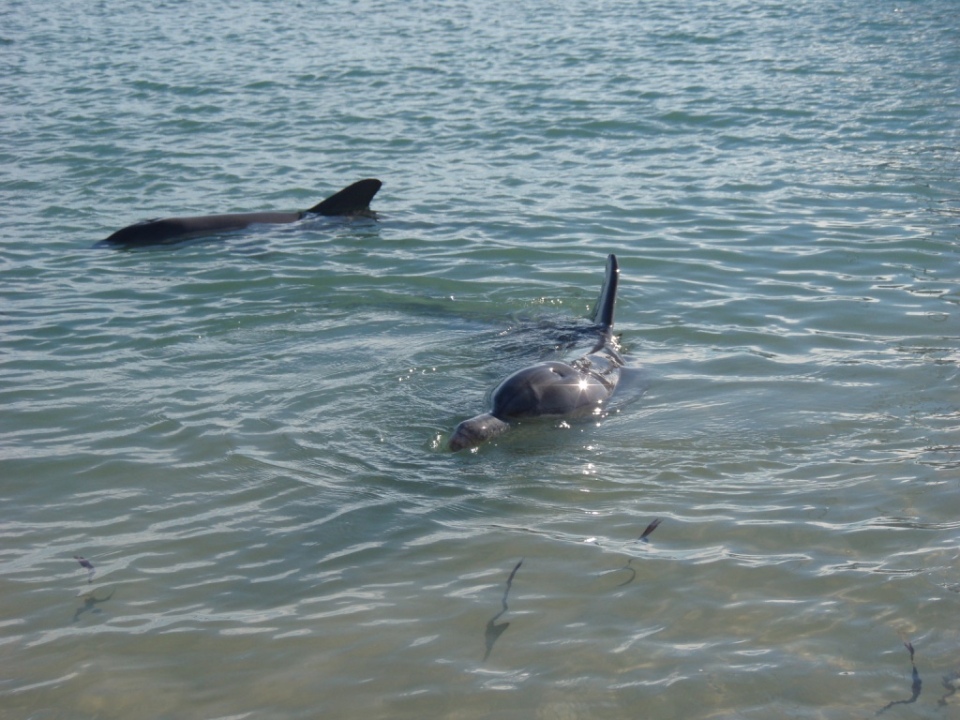 The carpark camp and our washing lines!

The kids woke early to see the dolphins and we had discussed the need to be really well behaved listen to the rangers and you might get chosen to feed the Dolphins. They only feed the senior female in the pod as the young need to learn how to fish and the males get aggressive. So there are only five dolphins that are fed and they only get 3-4 fish each. There were approx. 50-160+ people there for the feeding so the kids odds were not good. It is still really beautiful to see the dolphins and on our first morning we got to see 10 dolphins up close although we didn’t get to feed any.

We were all thrilled to see the 10 wild dolphins that visited Monkey Mia that morning and three of the ten were in the feeding program. As they only feed older female dolphins and they only get a small amount of fish if they all come in at once then the feeding is all over for the day. It all depends on the dolphins and if they have better things to do than visit with tourists.  After that we all went for a swim in the freezing pool and a dip in the heated spa. Andrew and I caught up on some admin (writing this) and the kids spent the best part of the day in the spa.

We all decided to get fly nets as the flies seemed to be getting worse. A happy family in the fly nets…saves swallowing too many flies.

That night we chose to splurge on dinner in the resorts more up market restaurant. Over priced and a bit disappointing but great not to cook two nights in a row! 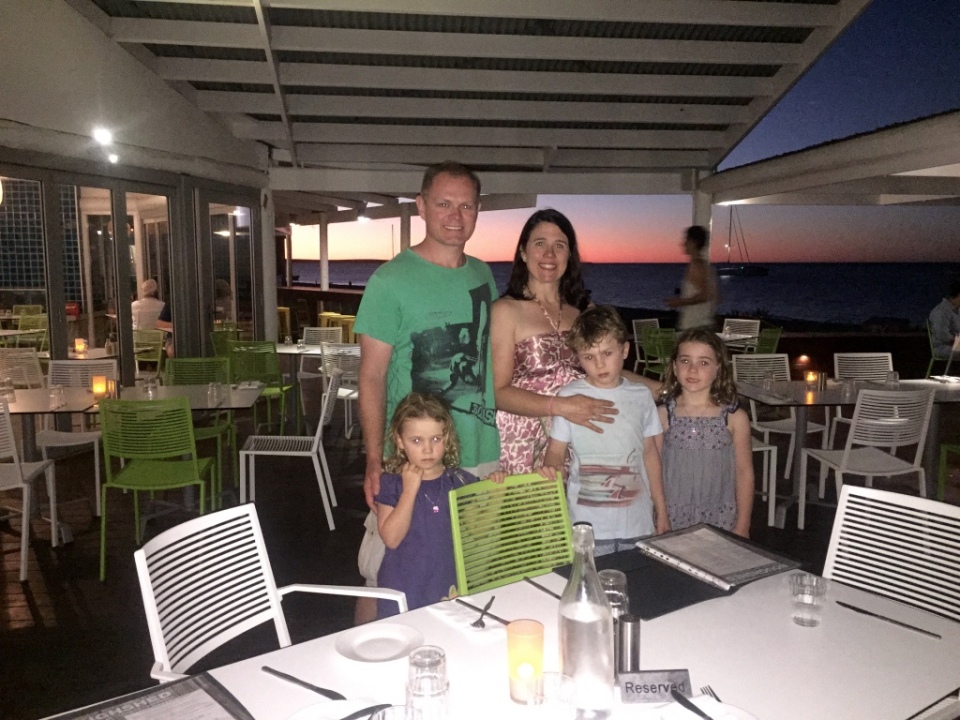 The next morning was ANZAC day and they held a dawn service at the resort. We decided that given we were camped only 200 metre from where the service was to be held we would wake the children and go. The sunrises and sets over the water at Monkey Mia. So we thought it would be pretty special. It was colder than expected but the dawn service was really lovely by the waters edge listening to the Canberra service. There were a number of locals from Denham, travellers, and resort staff. After the service they had a sausage sizzle for breakfast.

We met a lovely old chap wearing medals for his own service and that of his father in the British Army. Aaron was first to ask about his medals and then we got chatting about his story and how he came to live in Denham. His name was Tim Hargraves and he told us many tales about his travels as a young man he said that he travelled overland and around the world for 7 years working in any way in could and often living on a shoestring. He then told us of his good fortune to meet a beautiful woman, at a party, with whom he quickly fell in love and a few weeks later they married and for their honeymoon travelled overland from England to Australia back in 1970 in a range rover. That would be quite a trip back then. Tim had a wonderful way with words and had the children listening to every tale intently. He asked us to drop in and visit his home in Denham.

The children again went down to looks at the dolphins that came into shore for a feed. It is pretty hard to get a chance to actually feed the dolphins as there are anywhere from 80-160 people at the beach and only 5 dolphins are fed but on the second morning only when only one dolphin “Surprise” came to shore our three children and another little girl were luckily chosen to feed her one of the three fish on her quota…they were so excited and thrilled.

Day two getting to feed a fish to Surprise the dolphin 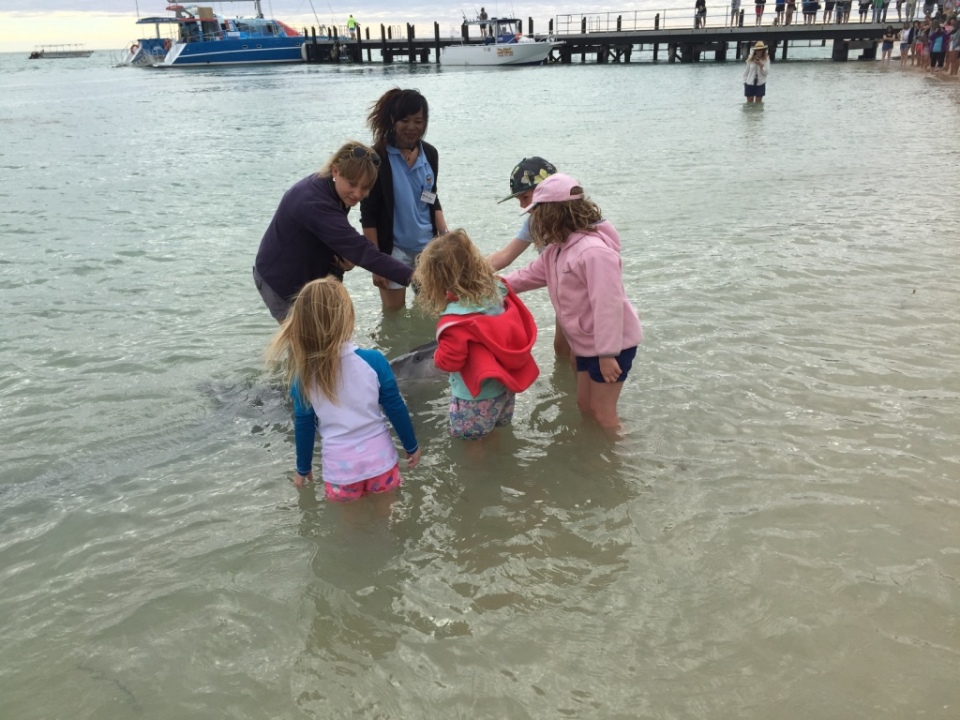 Dolphin coming for her fish

After the dolphin feeding we headed out to Cape Peron National Park.

2 Comments on “Monkey Mia and the Dolphins”