We packed camp and headed out of Sandy Point along the road we took a 4×4 track turn off to get to the Stock Yard Gully caves – the track proved a good little tester for the trailer and a bit more than expected but a nice track with many flowering Banksia along the way. We put on our head torches…yes we all have one and headed for the caves.

The Stockyard Gully Caves were a little valley, lined with larger gums trees, and surrounded with green pastures and at the end was a cave.  The cave cuts through a limestone hill and apparently the cave was used by old time farming drovers to rest their cattle and provide a cool dry shelter for the drovers. The cave was 250-300m in length with a bend in the middle and with torches out was very dark. We walked thru it was very dark but lovely and cool compared to the heat outside and we could imagine it was a good spot for a rest for the stockmen of yesteryear. We had a spot of lunch after before driving onto Geraldton. Note the sign that got Andrew excited although the road was less difficult than the shortcut we used to get onto the road leading to the caves.

We also spotted this stubby lizard along the way…very cool customer. 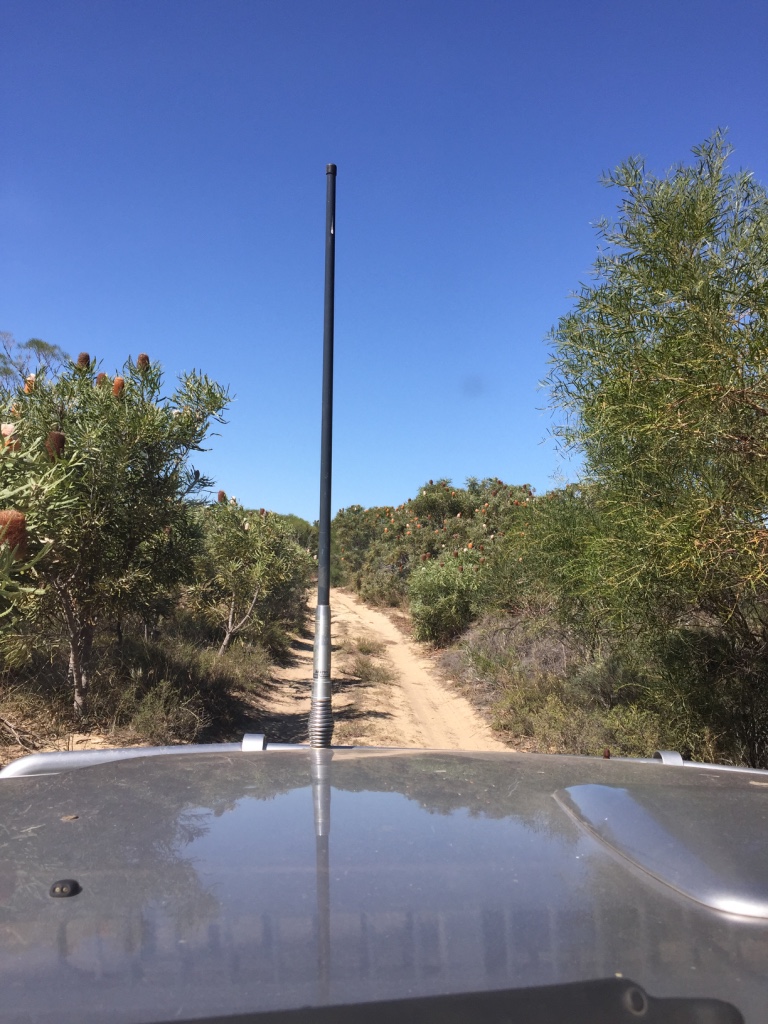 The beautiful shady gully leading into the cave lined with some big tall gum trees. 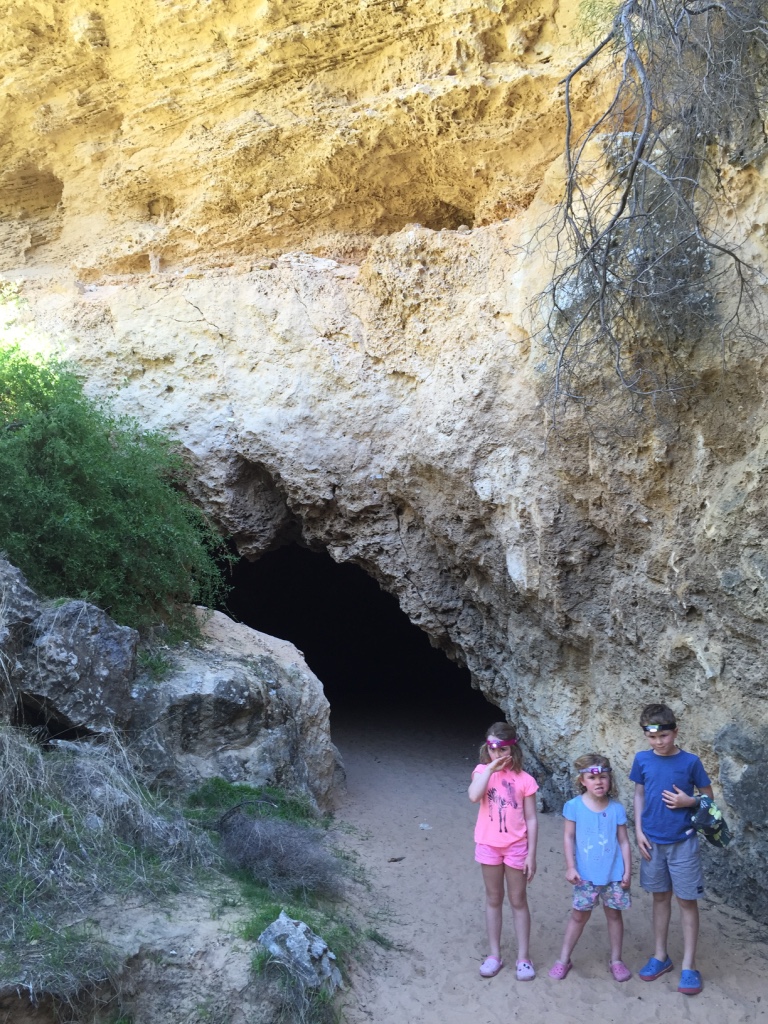 We were expecting to fly through Geraldton, food shopping and laundry and move but found Geraldton a surprising little town. Set on the gorgeous coast has some really beautiful beaches two block from town centre. We didn’t get a chance to swim at the beach but we visited the HMAS Sydney II memorial which is a recently erected memorial to the 645 Australian Navy men who lost their lives in a battle off the coast of Geraldton on November 19 1941. The beautiful memorial has a brass dome with 645 seagulls touching wings symbolizing the sailors that died and a wall of marble with all their names engraved.

HMAS Sydney II Memorial from a distance is a real beacon over Geraldton and beautiful from every angle. 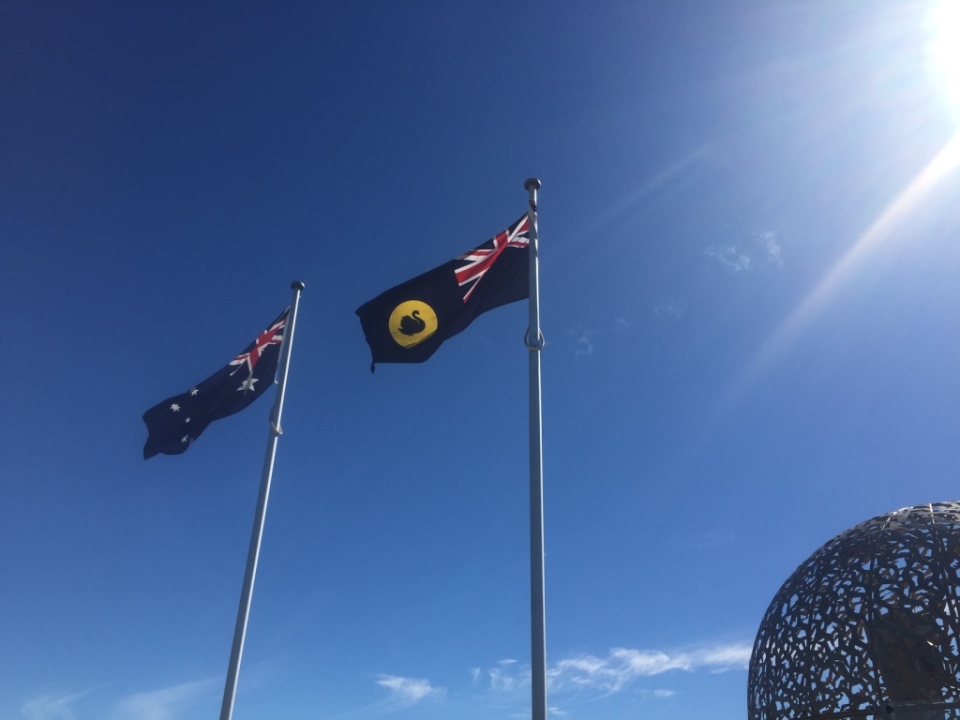 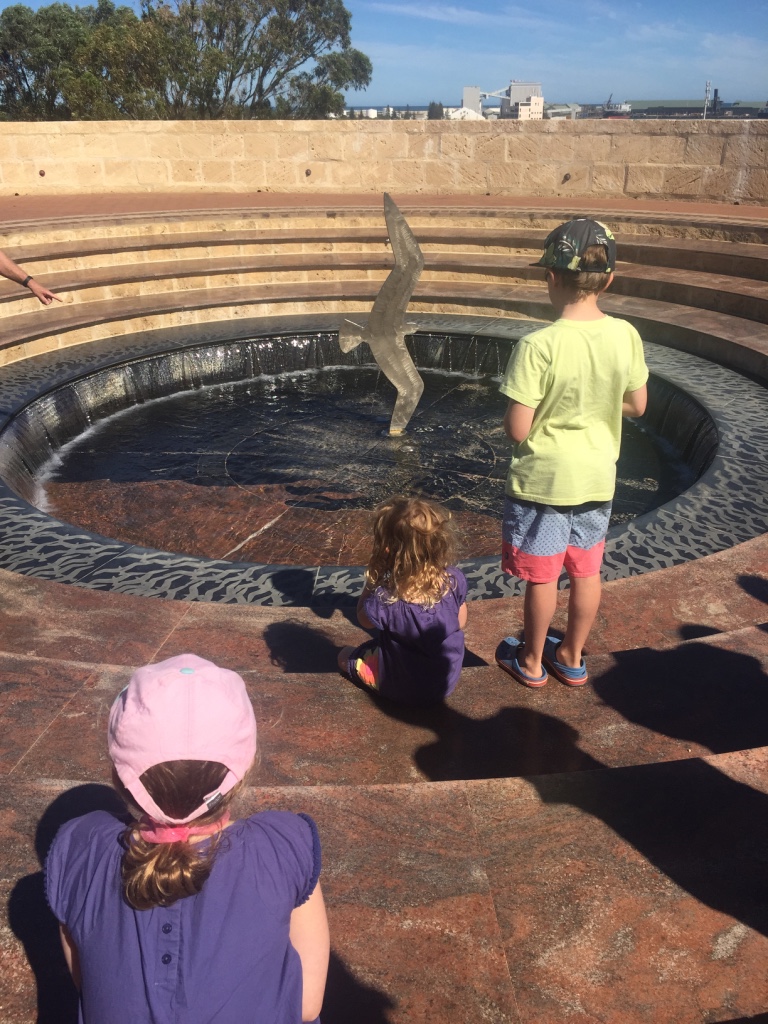 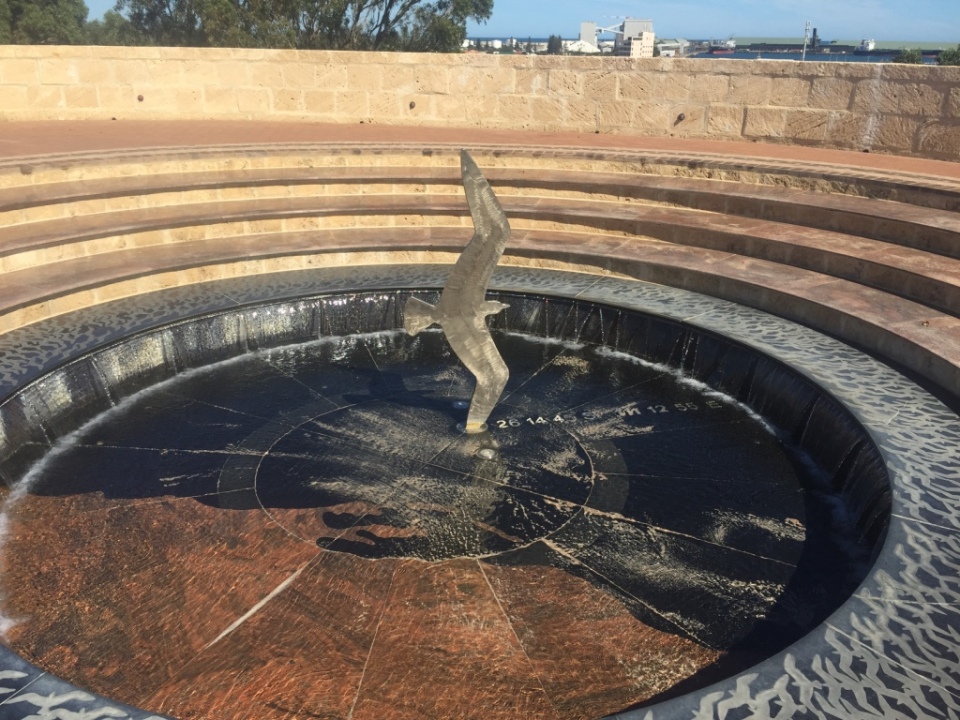 a pool of water showing the coast where HMAS Sydney II is now at rest and the GPS co-ordinates. 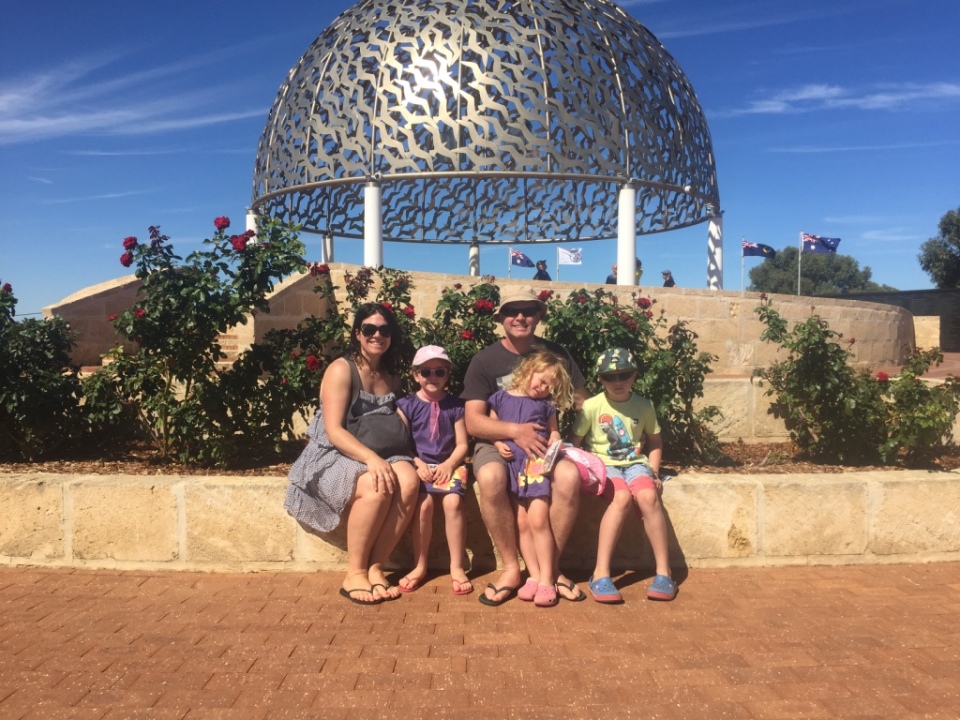 The volunteer guide offered to be photographer too great service! 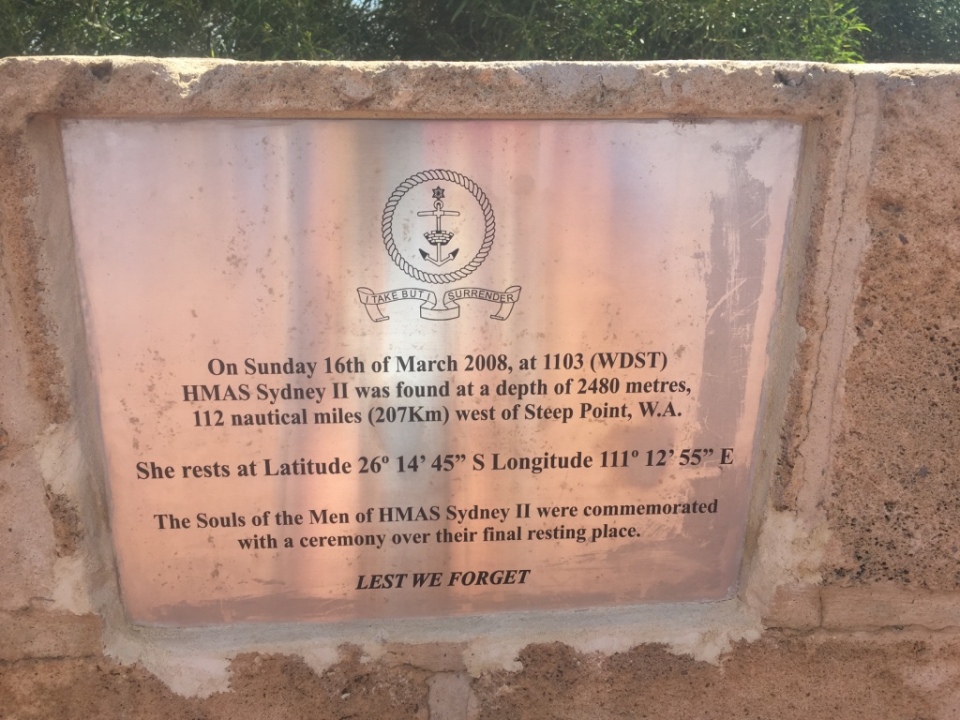 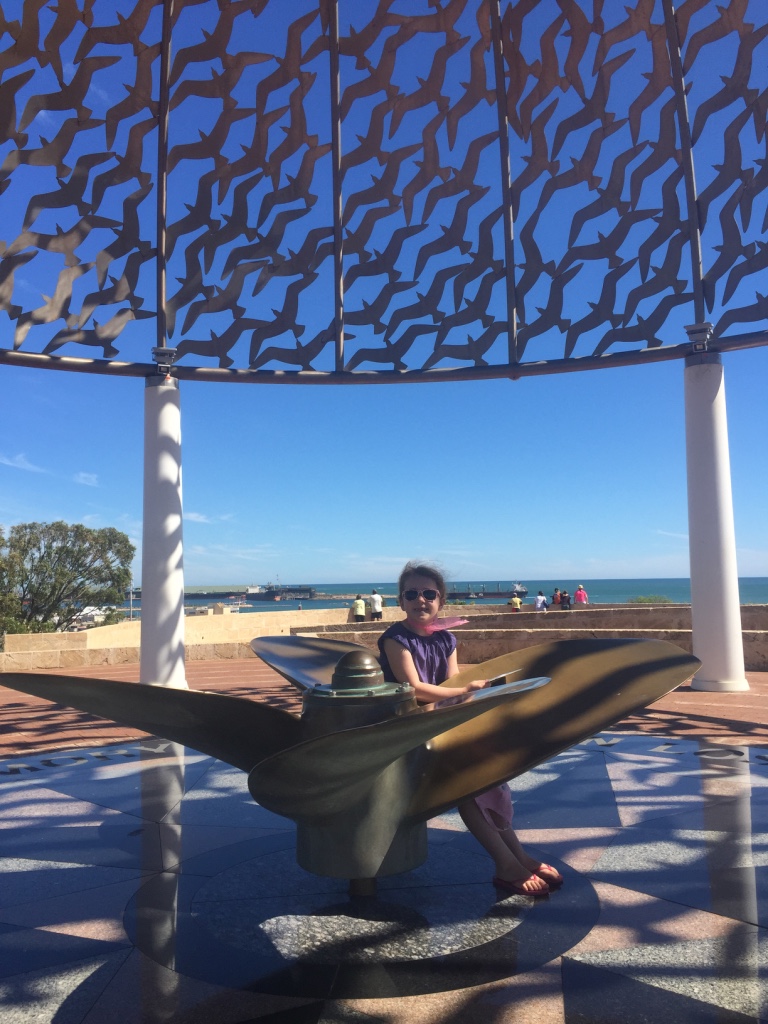 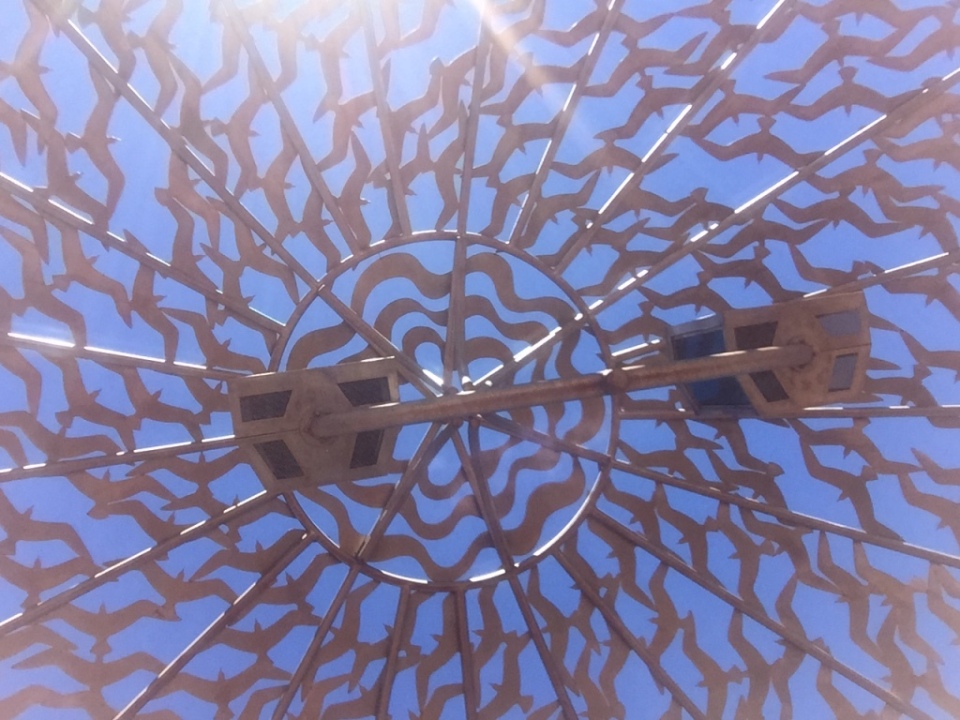 The wall at the HMAS Sydney II memorial

Sunset at Geraldton note the big tankers across the horizon 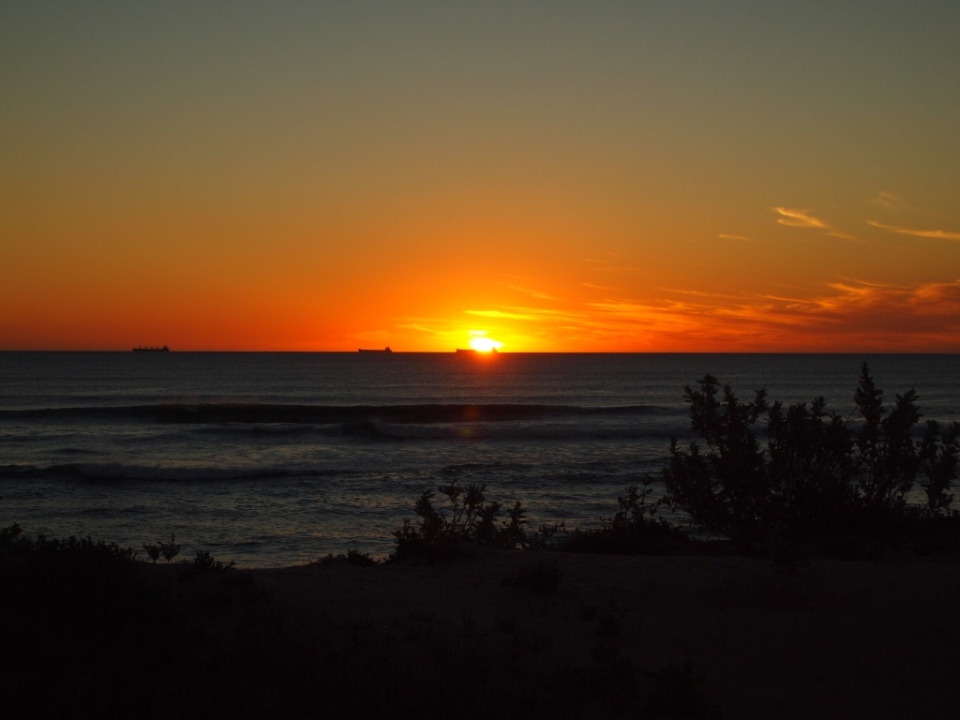 There are also a bronze statue of a Waiting Woman in 1941 era clothing to show the women that were left looking to sea hoping their loved ones would return and a replica of the bough of the Sydney II to represent the scale and strength of the large ship that sunk. Eerily the memorial was installed in 2001 to mark the 60th anniversary before the wreck of the Sydney II was found. The improvement in sonar technology and diving machinery they did not locate the wreck until 2006 and when they did it showed that a piece of the ship was broken off during the battle with the Germans which was remarkably similar to the memorial piece installed and even more eerie the Waiting Woman statue was set facing almost exactly where the wreck lay at a depth of 2400metres off the coast of Steep Point.

The lady waiting – dressed in the 1940’s period clothing

The lady looking to see – ironically directly to the location of the wreck of HMAS Sydney II – the wreck was discovered after this statue was placed. 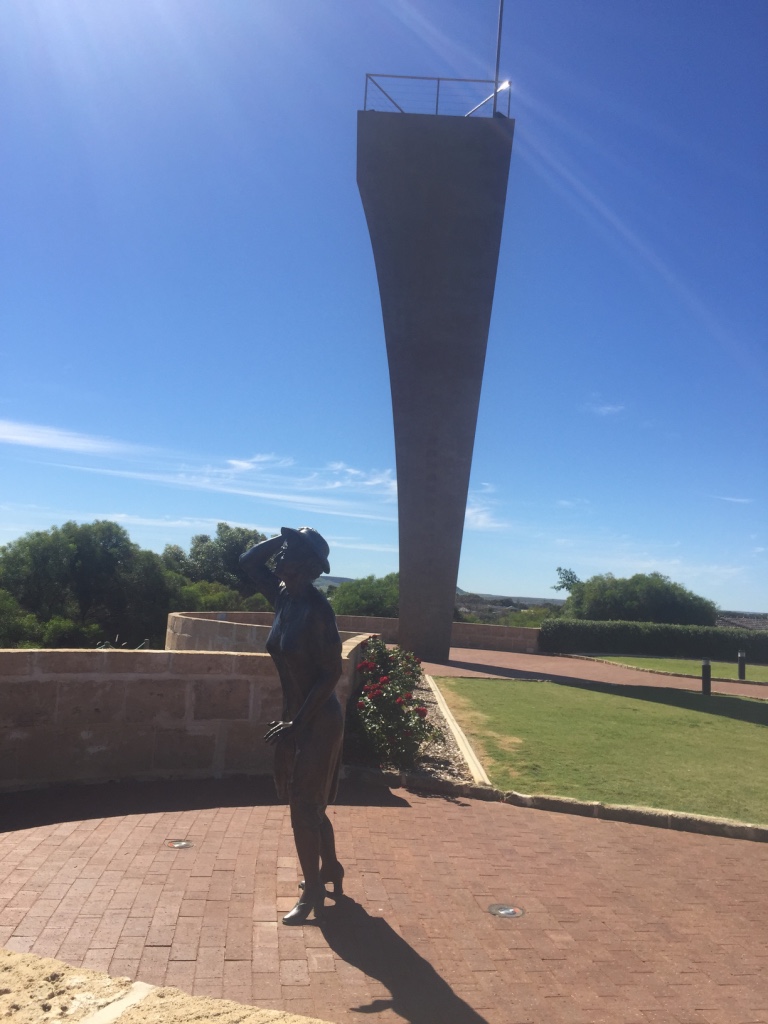 This memorial was of particular interest to me as my maternal grandfather had served on Sydney II prior to the ship being sunk and was luckily for him on a period of leave at Freemantle when the ship was sunk. He never really recovered from the loss of so many friends and shipmates – although our family would not have been here if he had been on board that fateful day in November. The memorial is a beautiful tribute to those men and a reminder of a sad piece of Australian History. The memorial was the idea of the local Rotary Club which worked to get the project funded and established -wonderful for the town.

Tags: Geraldton; HMAS Sydeny II, on the road with kids

← The Pinnacles and the Stromatalites
Kalbarri, River Gorges, beaches and flies →