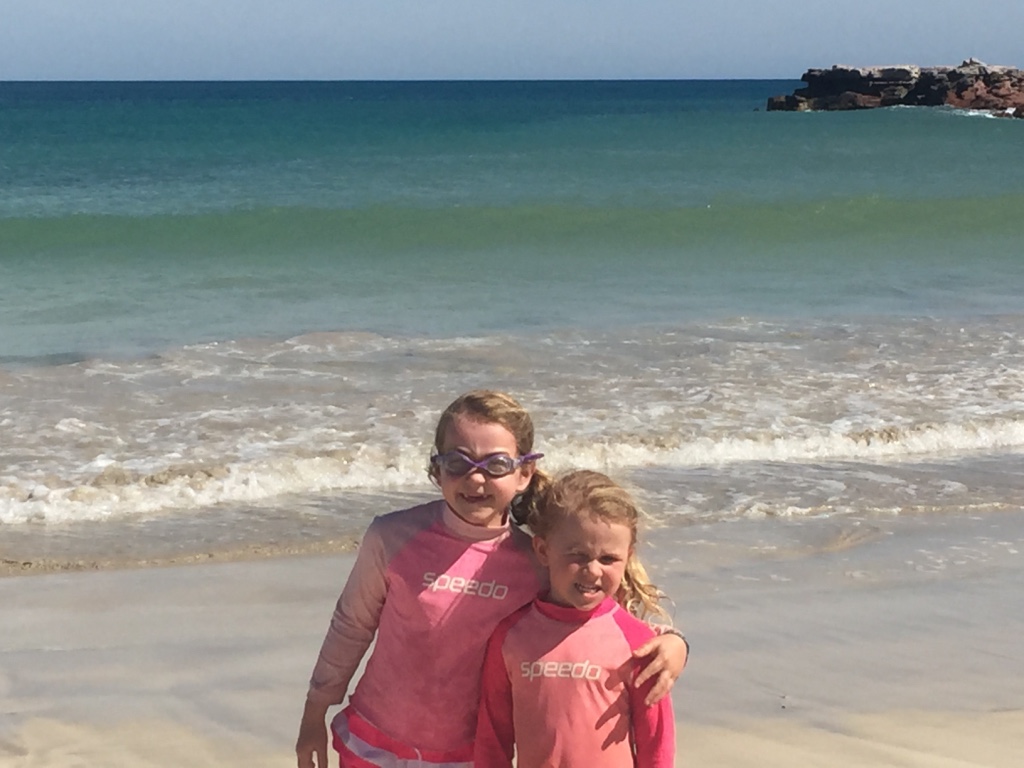 We decided to move north of Broome whilst we waited for my computer to be fixed and I was a little concerned that all the camp sites on Wiki Camps had signs with crocodiles on them! We followed the inside 4×4 track up the coast from Barred Creek up to Quandong Beach. The track became very sandy and we had to stop and let down the tyres to avoid getting bogged but it was a nice drive thru the sand dunes with the coast on our left. 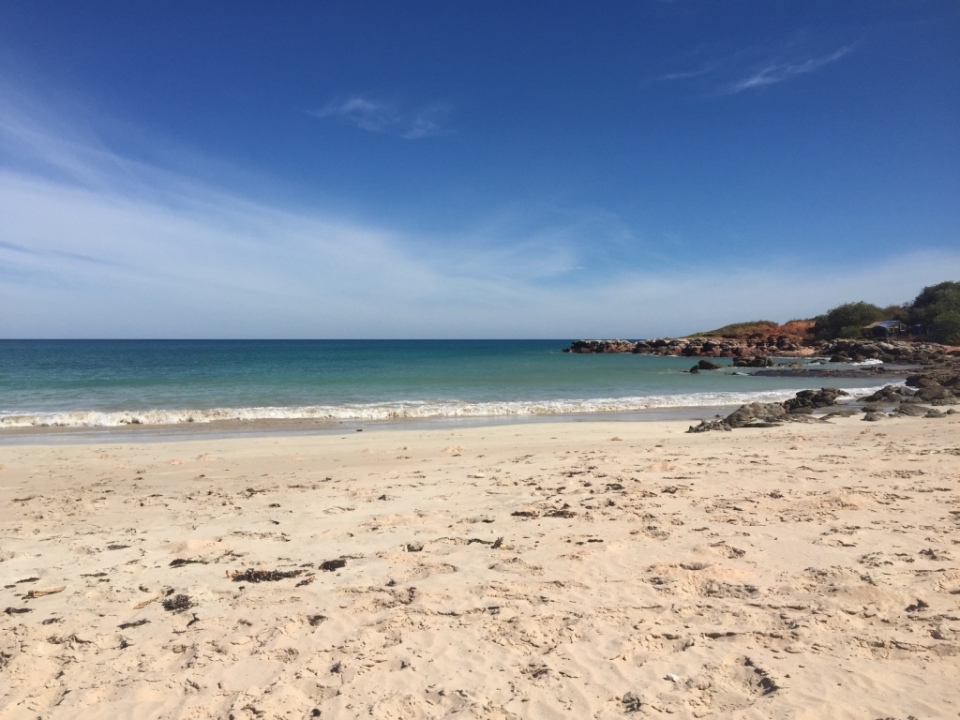 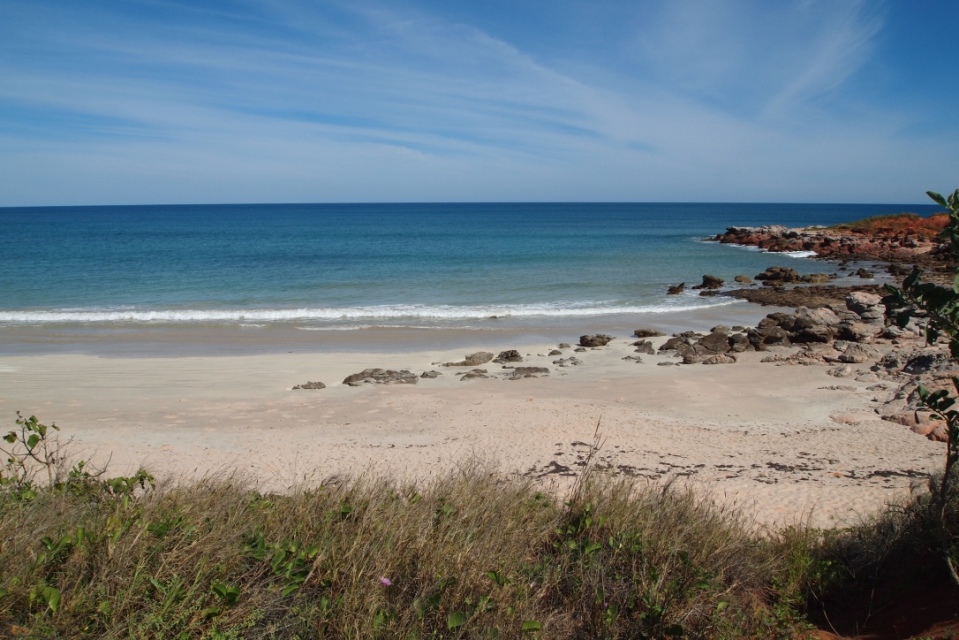 The beach at half way between tides

The point has the same big 10 metre tides that Broome and 80 Mile beach have and it was amazing each day to see the rocks appear and disappear as the tide came in and out. A couple camped near us went out collecting rock oysters off the rocks and we came along to try them. Aaron and Holly both considered it but wouldn’t eat one in the end. I enjoyed the sweet salty taste…I love oysters.

We were allowed a fire here at Quandong the first camp since we left South Australia so we took advantage got the camp oven out and cooked roast pork with all the trimmings, baked potatoes, baked apples, peas and gravy. We also had our fill of toasted marsh mellows and enjoyed camp fires each night. 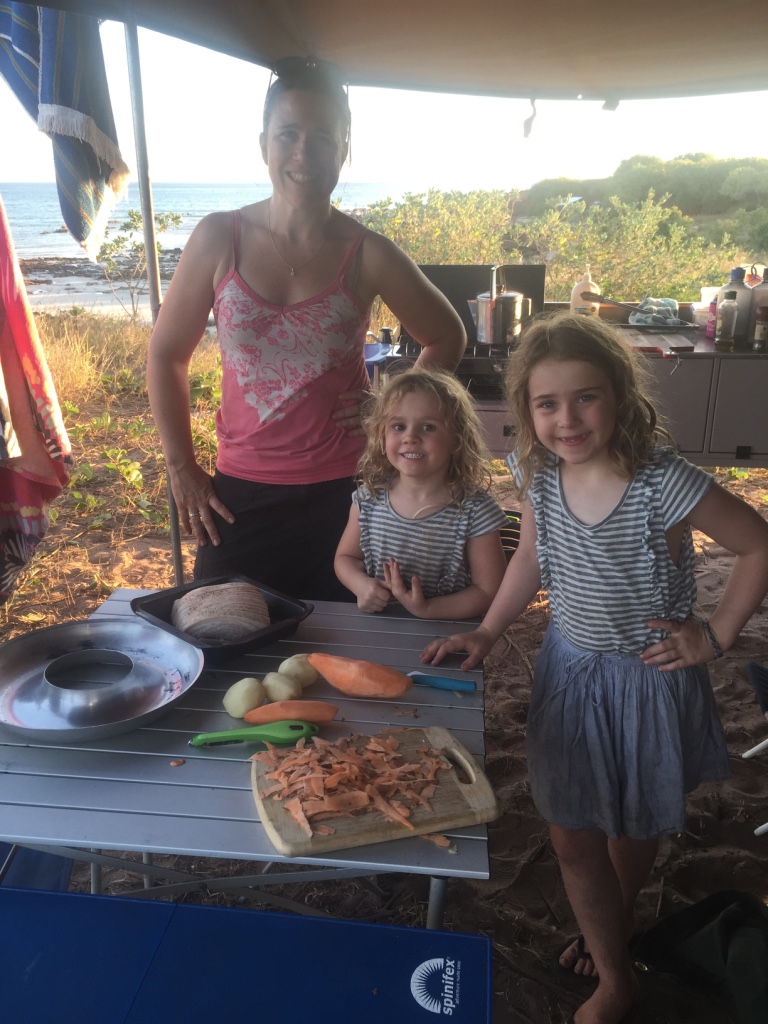 Roast Pork going into the oven 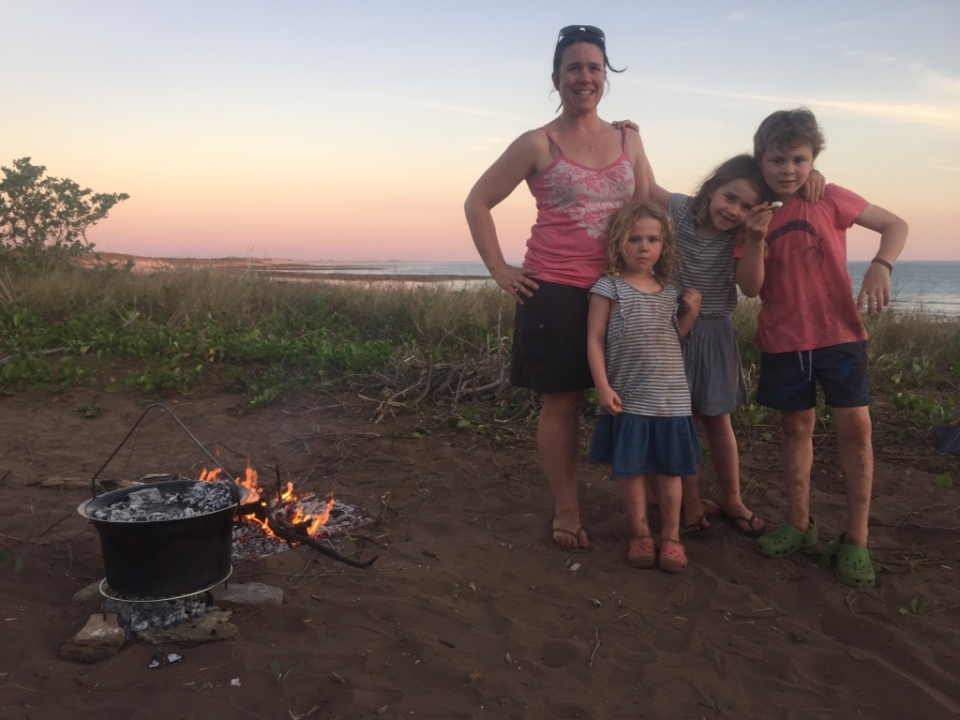 Sunset by the beach 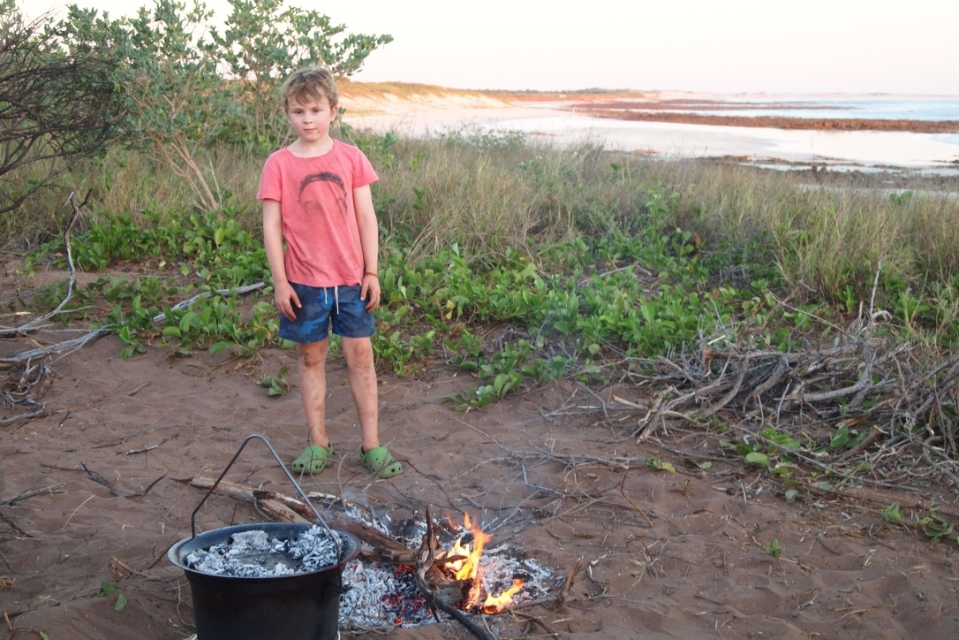 Aaron monitoring the coast for the camp oven

We again tried our luck at fishing without any success…but Aaron and I are not giving up yet. We enjoyed brief swims when the tide was in and we could see thru the clear water to check for crocodiles. Andrew and the children spotted some turtles swimming near the shore and watched them bopping up and down but due to crocodile risk snorkeling was out of the question. 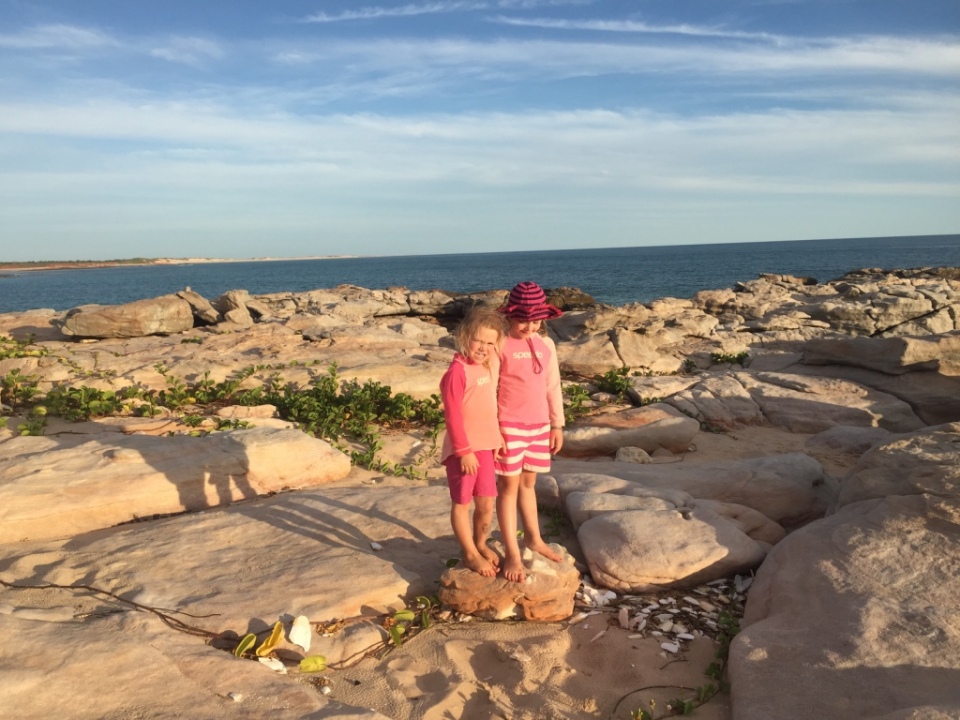 Climbing on the rocks 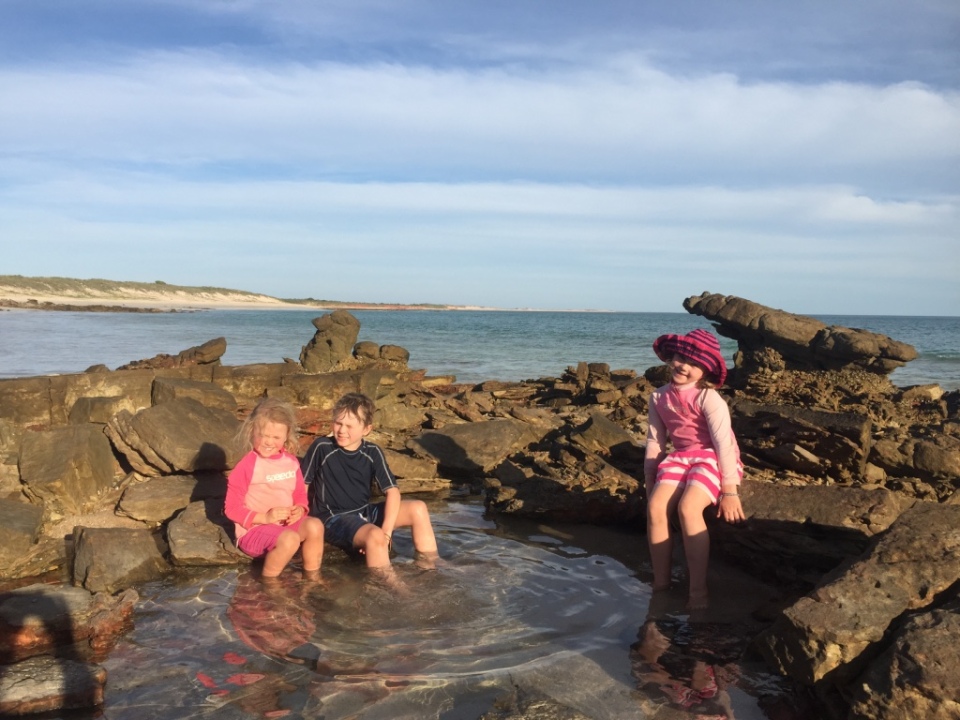 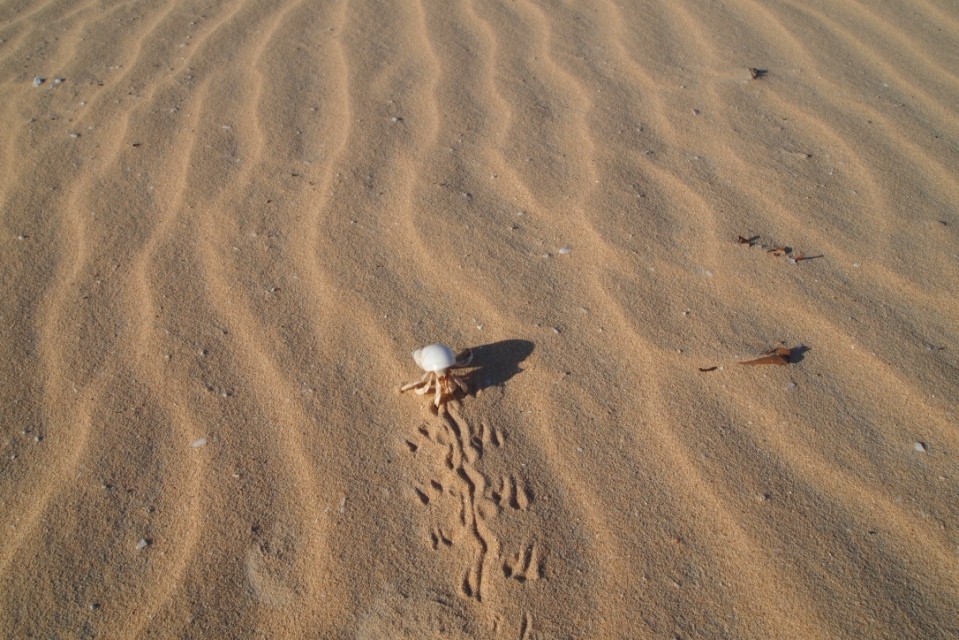 a hermit crab and his trail 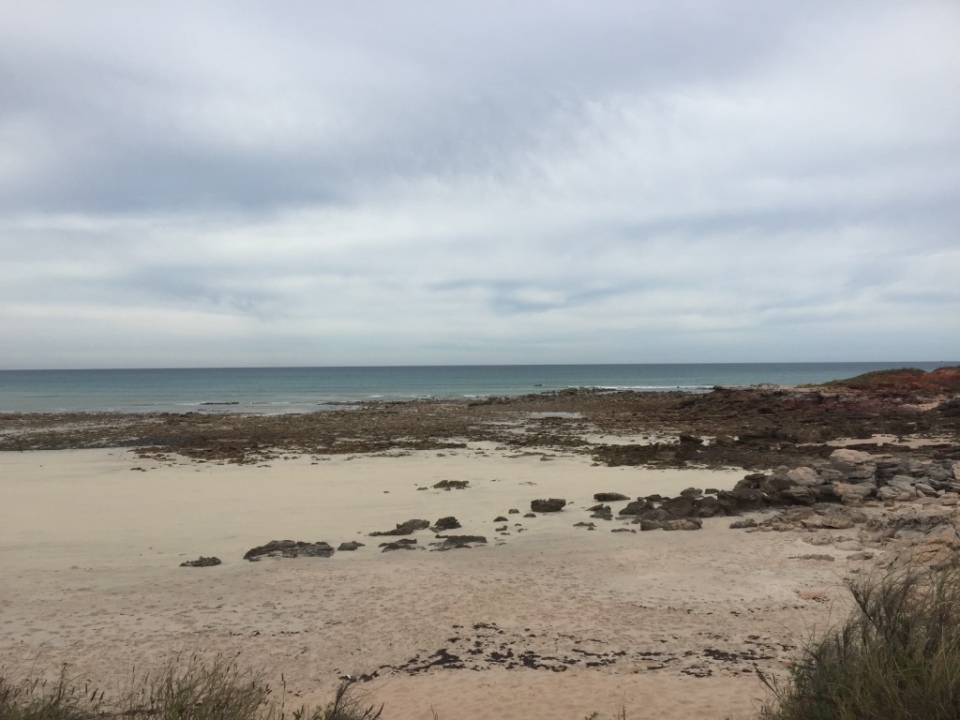 Low tide and the rock appear on the beach 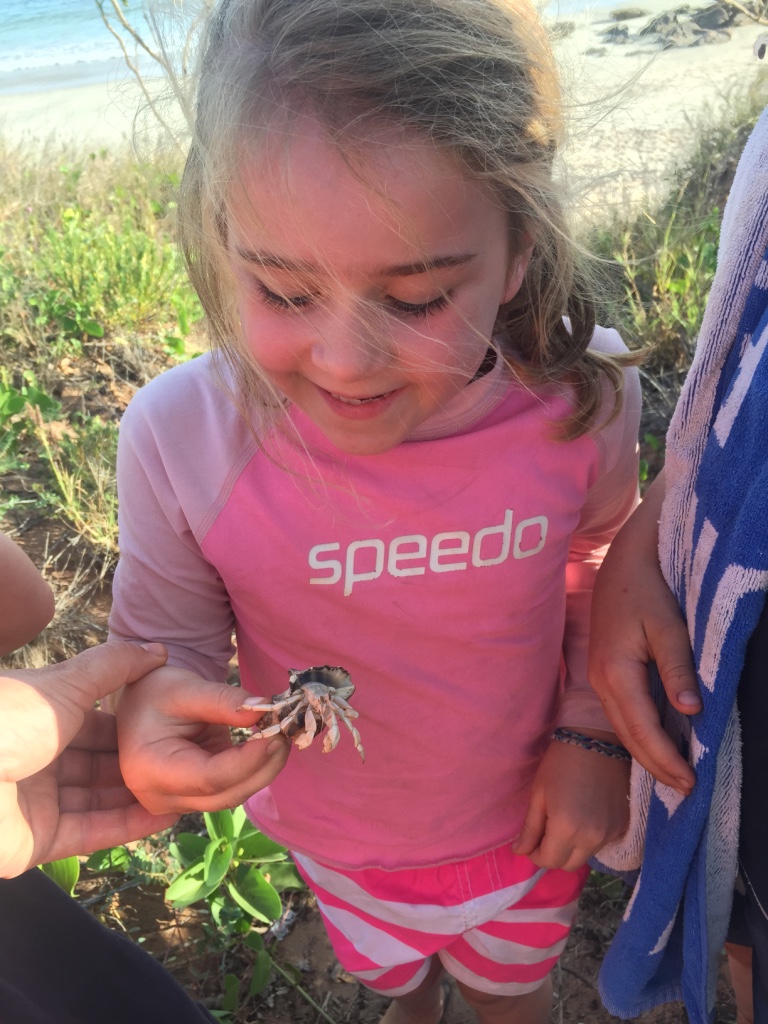 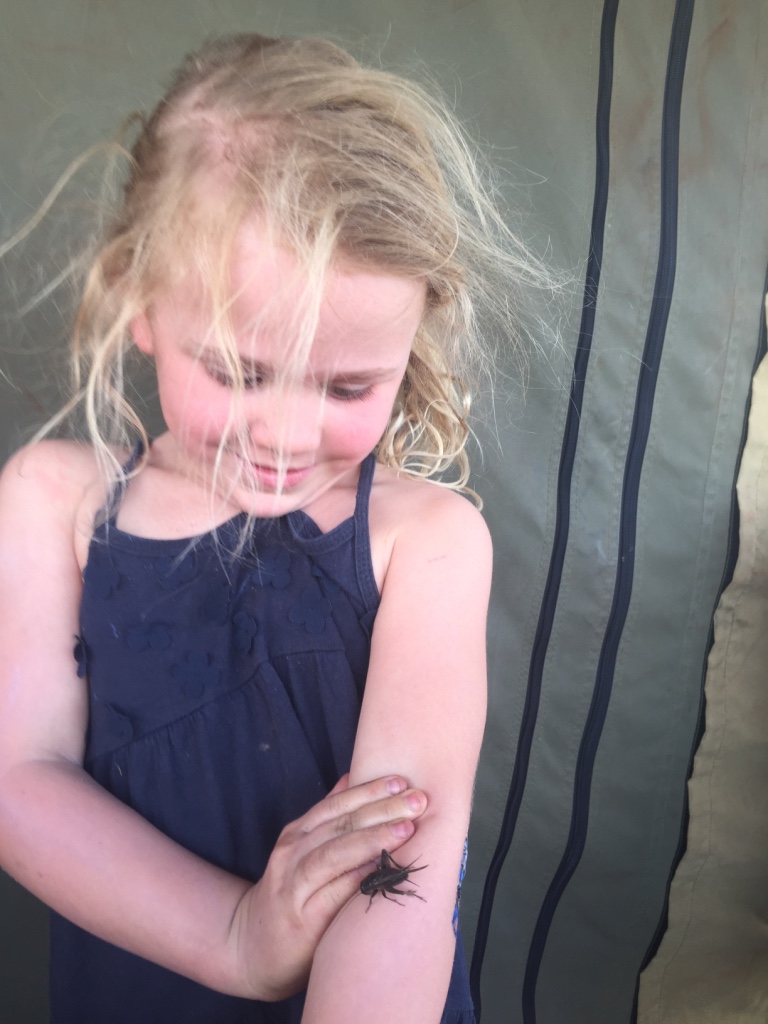 Bianca seems to rather enjoy picking up  lots of bug friends 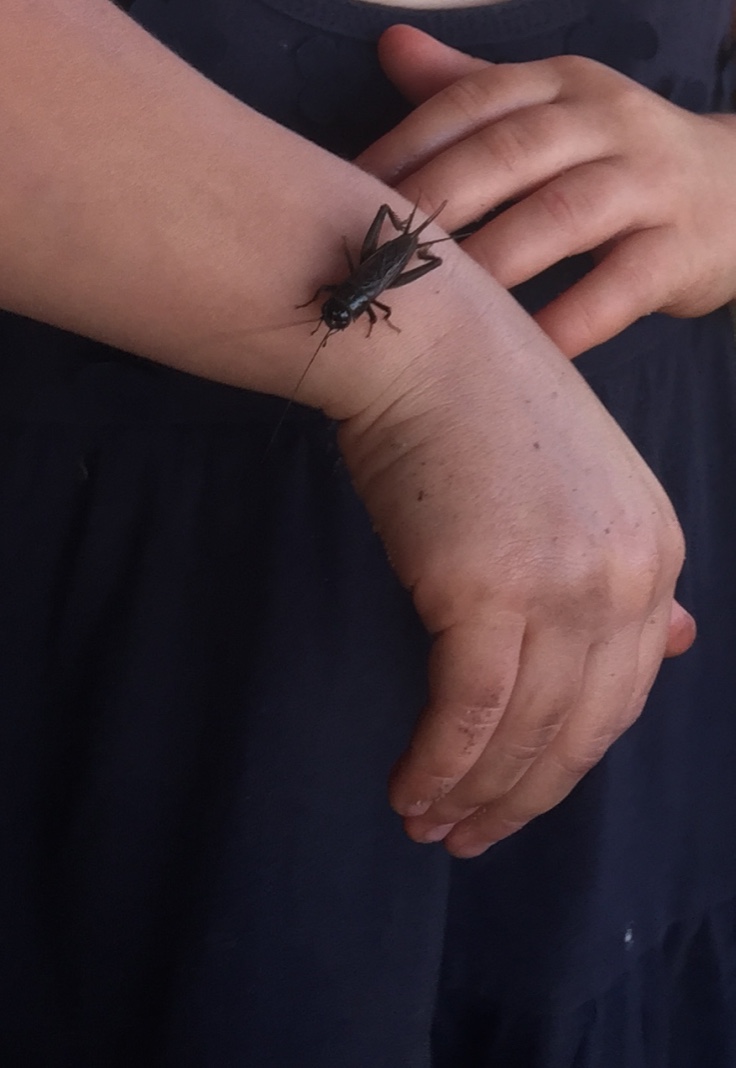 When the tide went out we enjoyed looking for sea creatures and paddling in the rock pools. After four nights we got a message that the part for the computer had arrived from Sydney so we headed back to Broome. On the way into town we noted a sign that said no swimming on the beaches where we had just been. As novice travellers into the Northern waters we will now be a little more cautious …we will be watch out for future warning signs to avoid swimming with the wildlife!

After being on the he tourist trail we were happy to stop for a while and catch up on some school work and relax a bit before heading along the Gibb River Road. We left Quandong and headed to Broome to collect the computer and start the next part of the journey. We are excited about the next part of the journey although we are a bit sad to be leaving the Western Australian coast and heading east…almost on the way home.

← Broome – Grandparents, pearls and camel rides
Derby for a day →