We arrived into the Mitchell Falls National Park camp ground just after lunch and thankfully the camp ground not too busy. We set up had lunch and then headed for a swim at little Mertens Falls as short walk from camp. 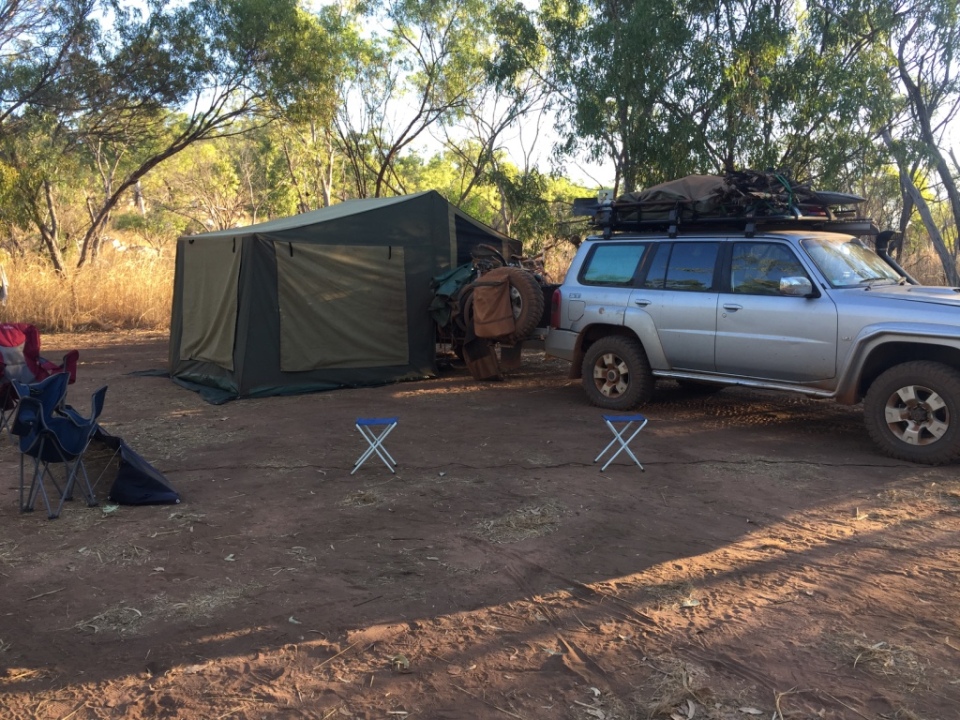 The top of the little Mertens falls had an awesome view out over the treetops and some little pools for a much needed cool off. 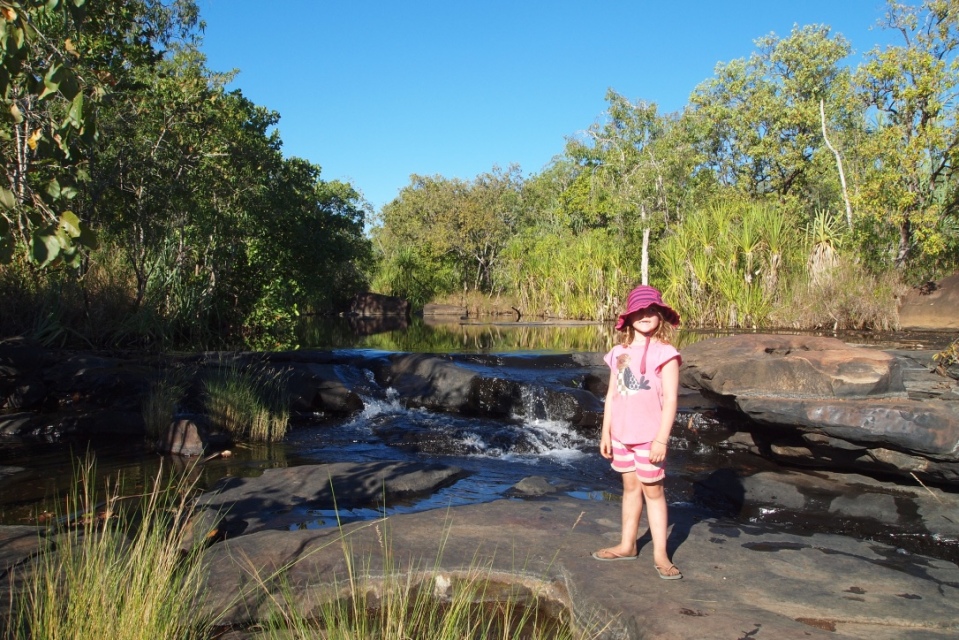 Holly at the pool near Little Mertens

View from the top of little Merten Falls

Mitchell Falls has a commercially operated helicopter service which runs to and from the top the Mitchell Falls and the camp ground. The falls are approximately 9km return walk and whilst we could walk we decided that it would be special to see the plateau from above. They only charged us for 4 seats (Holly and Bianca shared a seat) which was lucky as there are only 4 passenger seats in the helicopter! We booked a flight from the falls back to camp.

We all went to bed excited for the next days adventure. 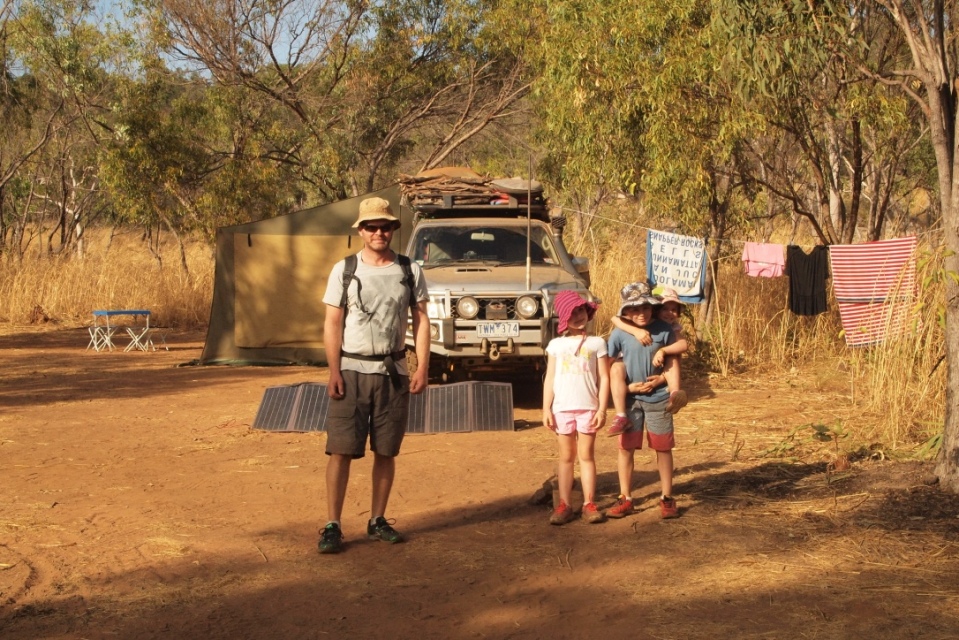 Setting off for the walk to Mitchell Falls

In the morning before we set off we had to go and weigh in for the return helicopter flight…the weigh in was with our heavy backpacks (lots of water) so I agreed to be weighed! Then we set off on the walk at 7:45am as there was lots to see. 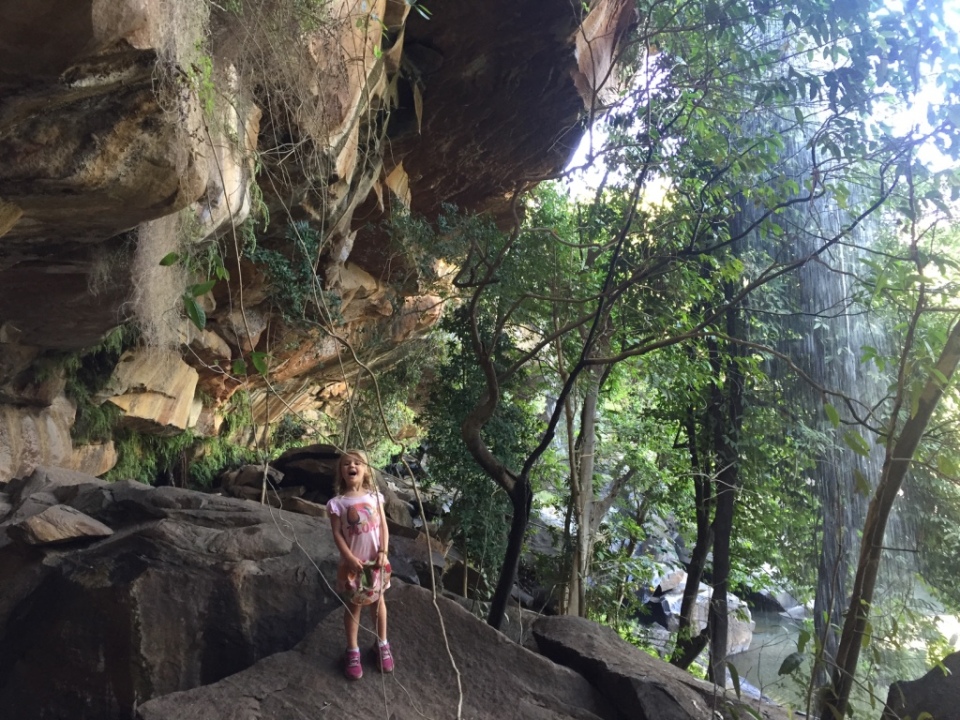 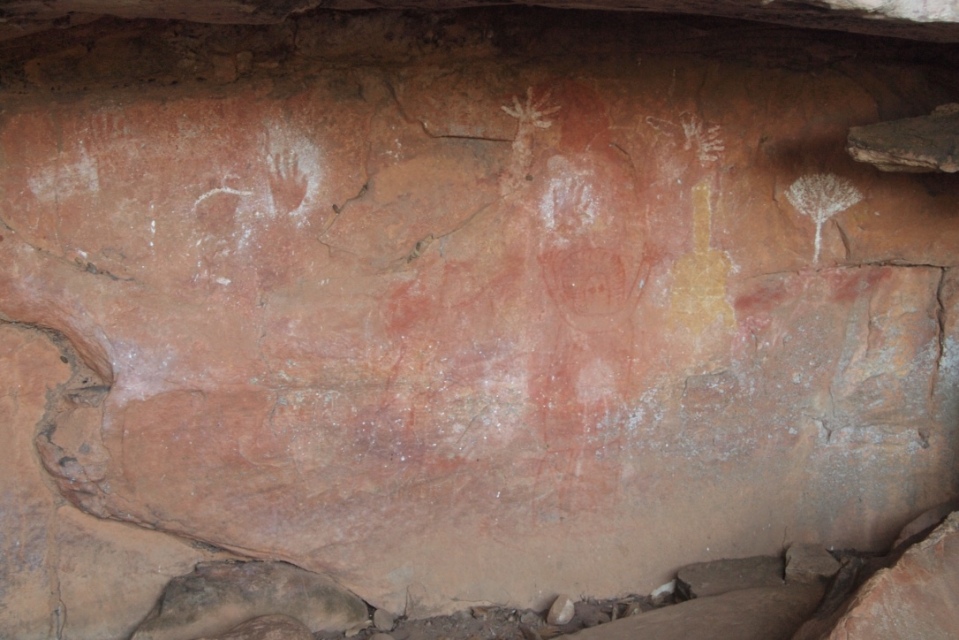 View from under /behind little Merton Falls

aaron and Bianca with the Kangaroo Rock Art

We stopped at Little Mertens Falls and looked at the pool and some beautiful rock art in behind the falls. We needed to climb around on some big rocks which Aaron loved and I was a bit worried about the girls. 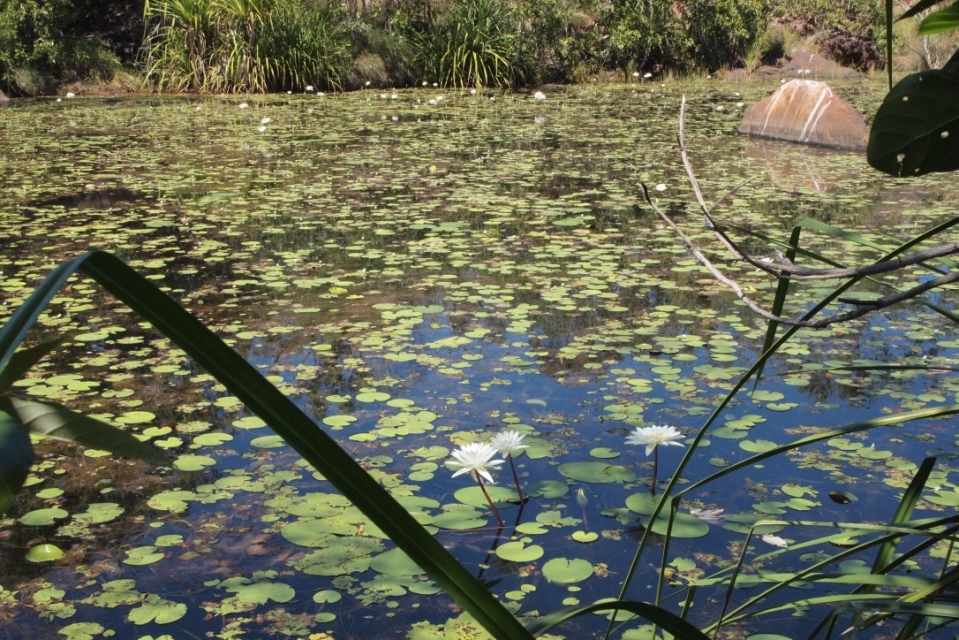 Lilly pond on the walk to Mitchell falls 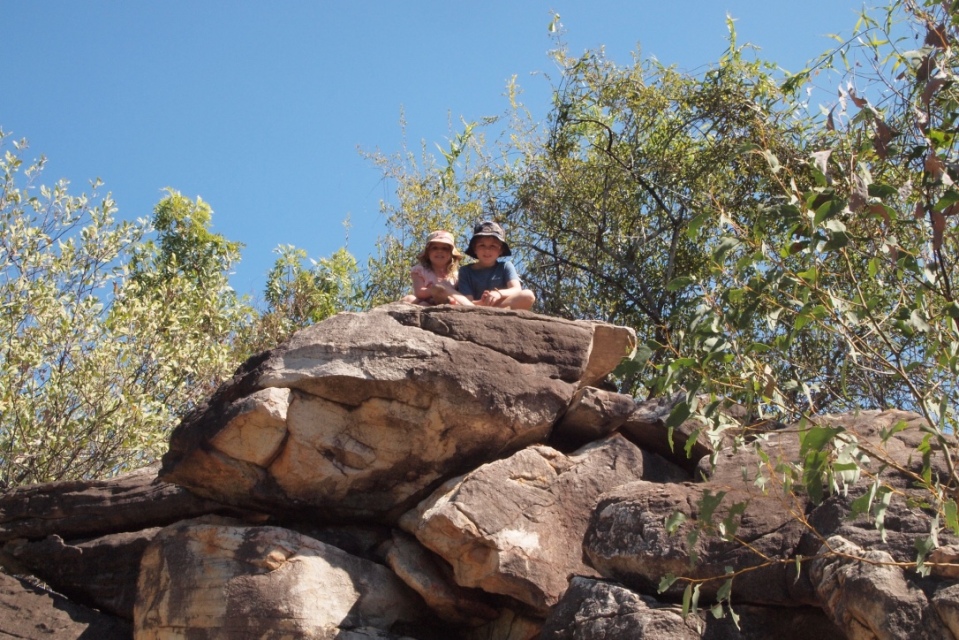 Climbing rocks on the way to Mitchell

The track was relatively flat and easy walking which was unexpected. Along the way we passed some creeks, rock art, pandanus bush and a stunning lilly covered billabong before reaching the breathtaking Big Mertens Falls. 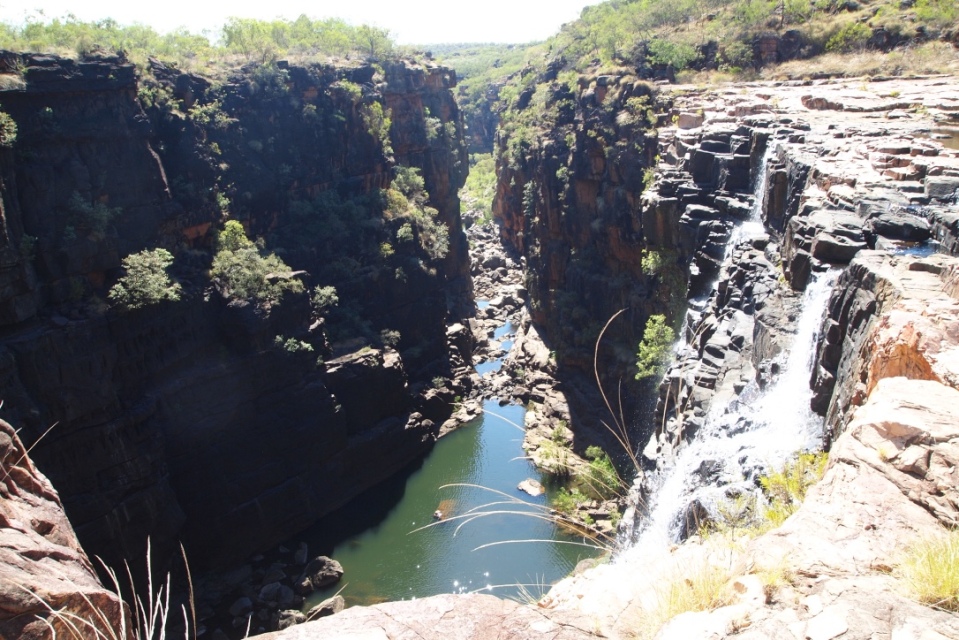 View out of Big Mertens Gorge 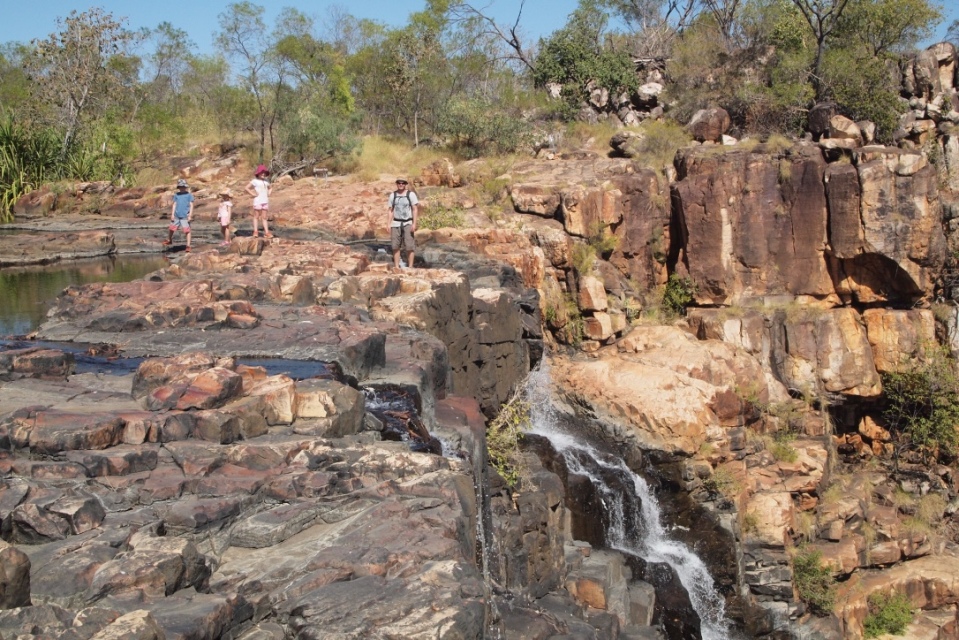 The top of big Merten Falls 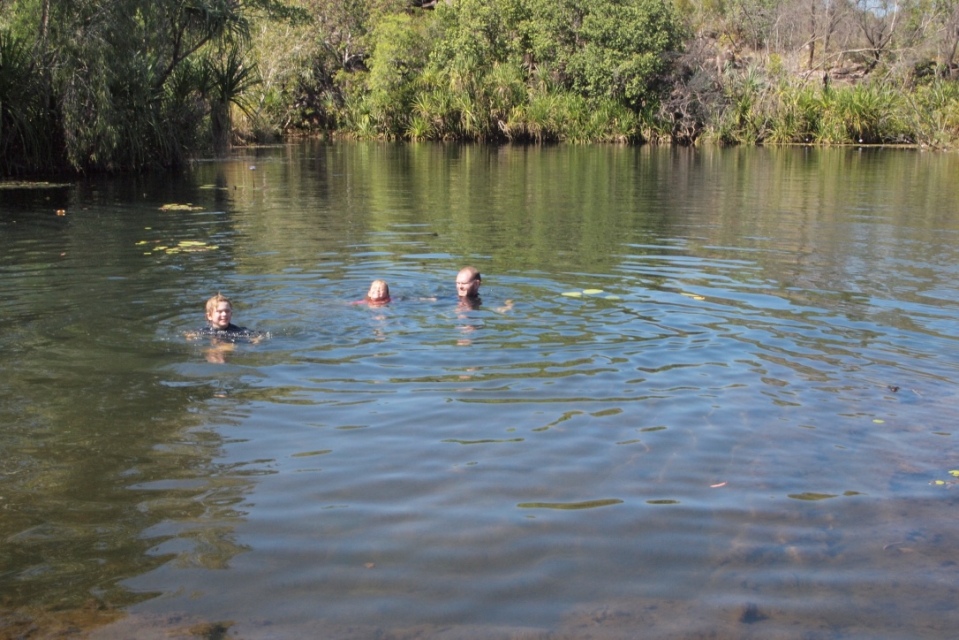 These falls large have a beautiful gorge view down through the plateau and a huge waterfall dropping into a deep inaccessible pool below. The traditional owners believe that the pools below have snake spirits and they should not be swam in so that the spirits are not disturbed…we wondered if perhaps these spirits are crocodiles!

We were more than happy to just take in the view and have a snack before having a swim in the upper pool.

After our swim it was another short hike up and into Mitchell Falls. The falls are set in an amazing location and are fed entirely from rainfall so they flow heavier after the wet and by the end of the dry season they can stop flowing. We were glad that there was still water flowing for our visit.

View over the Mitchell Falls on the ground 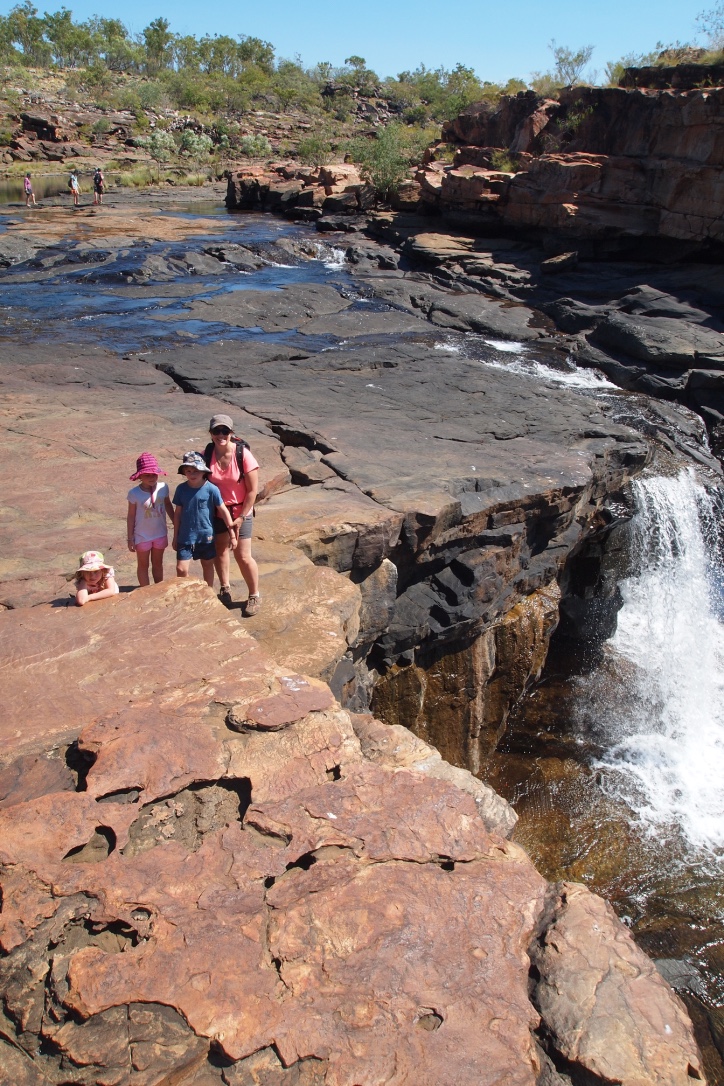 Playing in the waterfall at Mitchell top pools

We had two hours eating lunch swimming and taking in the views around Mitchell Falls before we needed to walk across the top and over to the Helipad for our flight back to camp.

We were very excited…this would be Bianca’s first helicopter ride and the first time all in a helicopter together! When the pilot landed to pick us up She chose the seating allocation – girls in the middle back, Aaron in the front next to her and Andrew and I on the rear sides – without the doors! 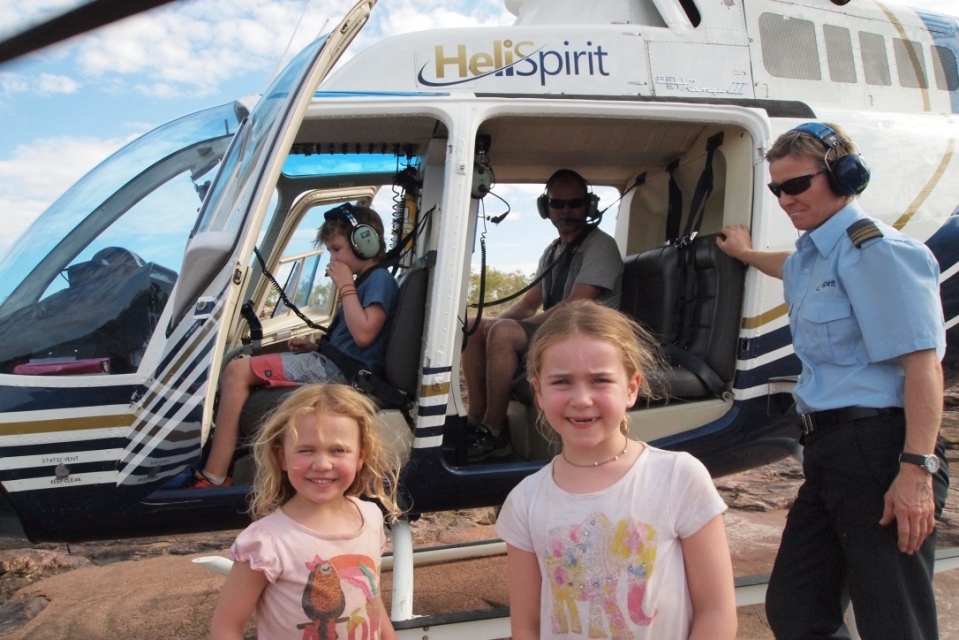 Our flight was to fly and orbit over Mitchell Falls then fly down the Mitchell River to the junction where the saltwater meets the river, try and spot some crocs, then fly an orbit over JCR Falls and back along the river to camp.

Very exciting and as if not exciting enough as we did the orbit over JCR Falls the door next to Aaron pops open…he quickly grabs the door and holds it shut…which the pilot commends him and thanks him for quick reflexes. I was now wielding the camera leaning forward out my side open door and also holding Aarons door closed!! But we all remained cool with that…the pilot then called in and requested an extra landing back at the top of Mitchell Falls – to secure the door! Then it was back to camp! 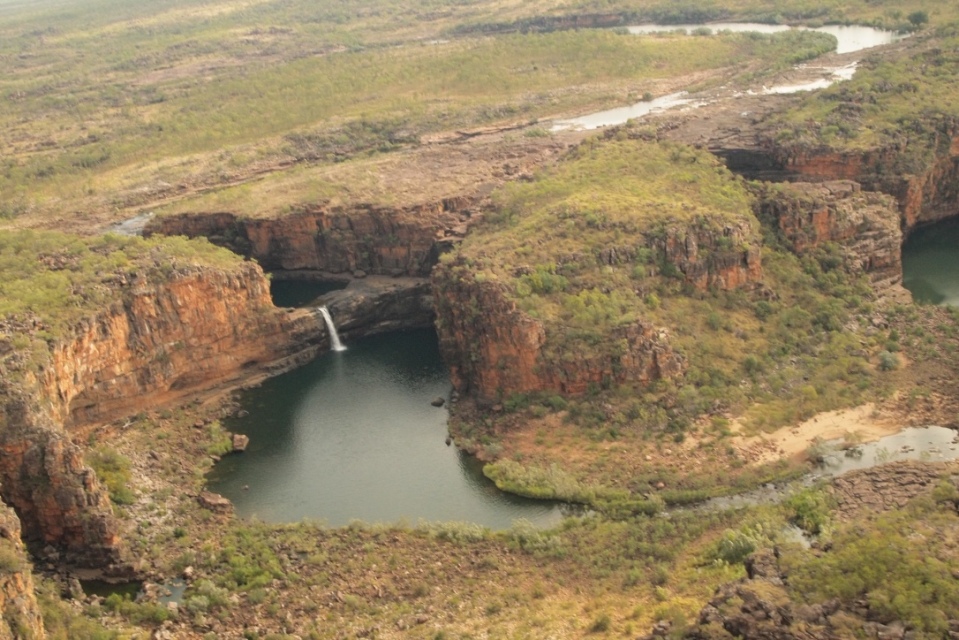 Deep river views out across the horizon

Glad to be back on the ground!

Back at camp we were thrilled to find that our new friends had set up camp next to us. The boys set to work lighting the fire. Up on the Plateau it was really hot during the day and cooler at night so the fire brought the added benefit of heat and ambiance.