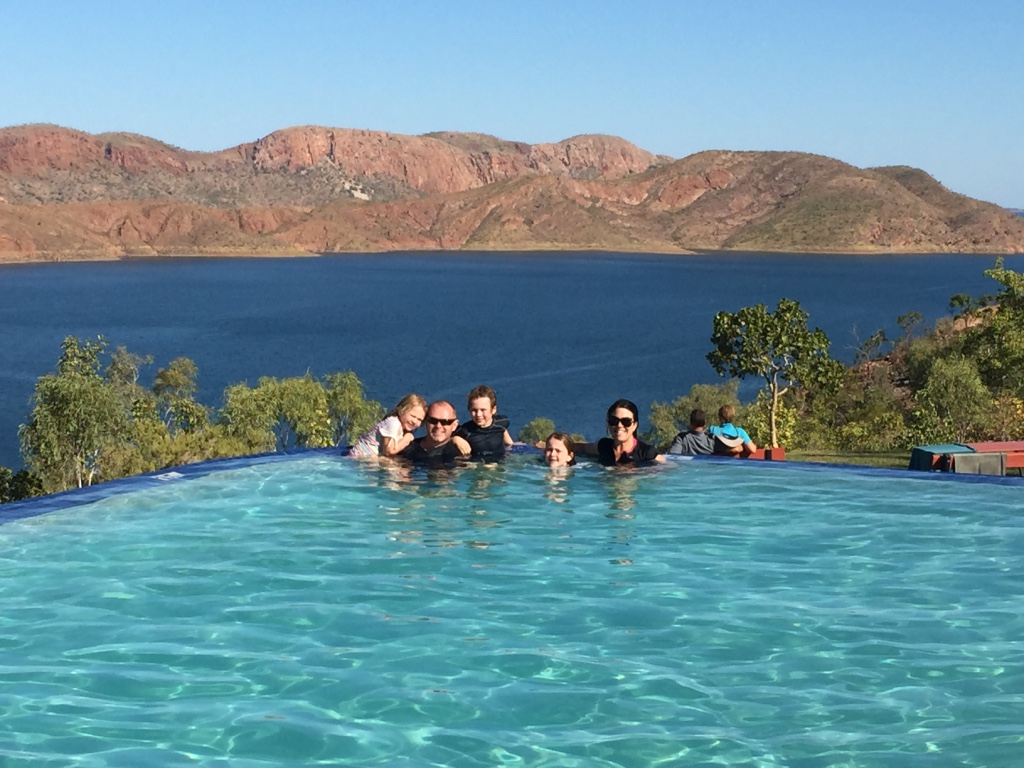 Lake Argyle is called the Jewel of the Kimberley – and it was easy to see why….the amazing azure blue against the rocky hills provides stunning views from every angle. The drive to Lake Argyle from Kununurra is only 75km, mostly bitumen and as you get closer you get small glimpses of the big blue lake. The camp ground is perched high above with stunning views over the lake (although not from the actual camping sites) and the biggest attraction is an amazing infinity pool with views of the lake.

First glimpse of the lake

The Lake Argyle caravan park provide grounds men to escort you to the campsite and provide guidance on reversing into the allocated space…their guidance was of varying assistance but they were friendly blokes. Our camp neighbours had just arrived also, another family on a round Australia trip – The Nelson-Hauers -Luke and Joanne and their two children Jesse and Pippa and within a few minutes the kids were all playing together.

It was a hot afternoon and we all headed straight for the infinity pool which was VERY cool and refreshing (read Freezing!!) but it was a hit with the children and we spent the afternoon swimming – the adults had quick dip and then braved the water for the family photos! 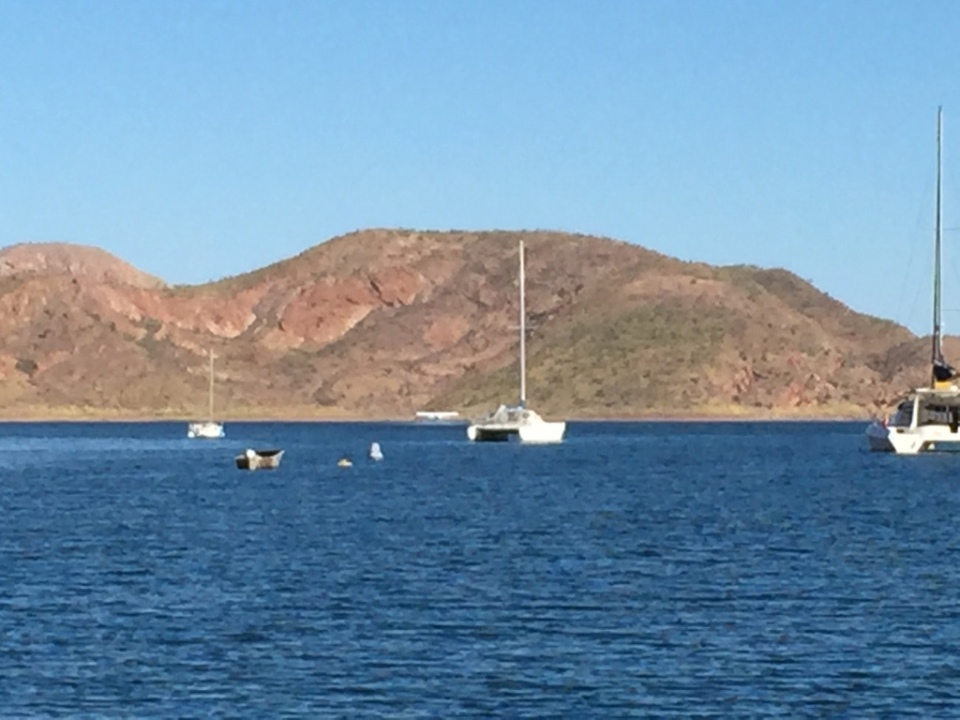 Boats on the lake

Lake Argyle is huge it is Australia’s largest man made freshwater lake. Created by damming the Ord River in the late 1960s in order to capture the huge wet season water flows that pass thru the Ord River Valley. 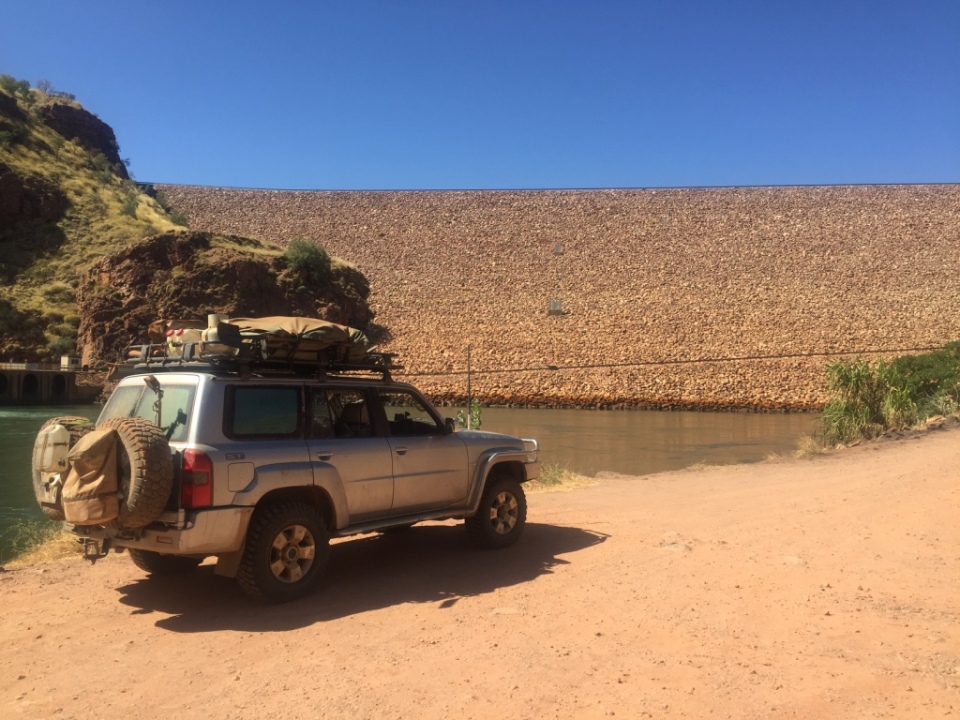 ON the authorised of the impressive structure 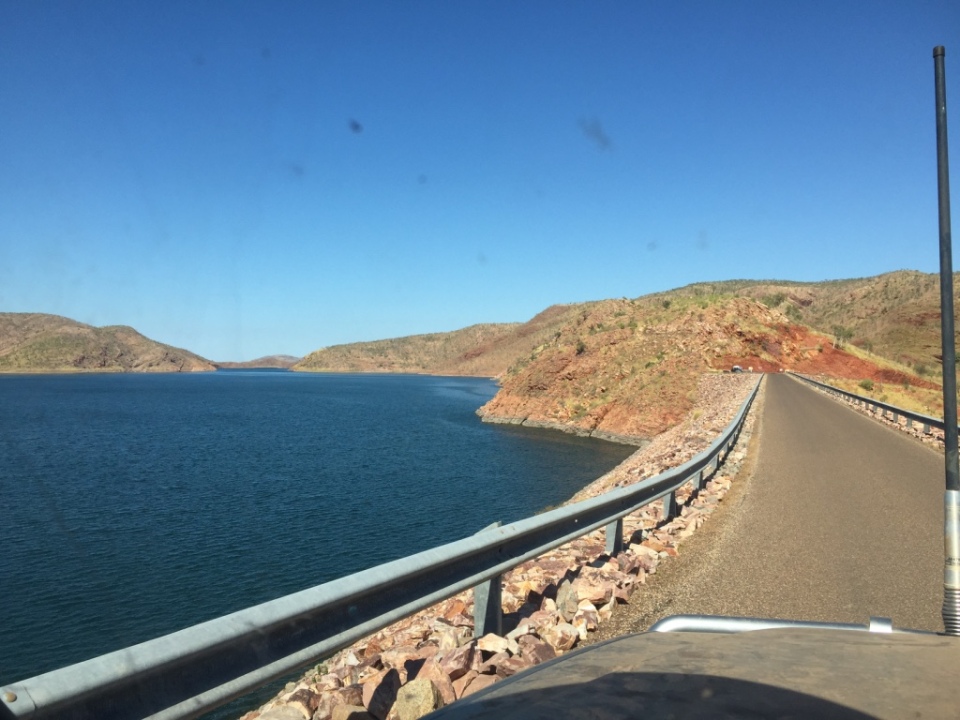 It was built to provide fresh water for farming irrigation in the Kununurra Kimberley region and at the same time generate some Hydro electricity when releasing water into the lower Ord River. The lake holds more than 21 times the amount of water in Sydney Harbour. It looks like a seaside view with the water disappearing on the horizon. We drove along the dam wall and were amazed at the scale and depth of the structure.

View of the Ord River down stream of the big wall

We visited the historic Durack Family homestead, which was relocated prior to the dam being filled. Originally the stone homestead built in the early 1900’s was cemented together with termite mound mortar…(which only has a short life span) so the house could easily be removed with every stone numbered and then rebuilt in the current location. The Durack family were pioneers into the Kimberley and one of the first families to establish pastoral lease in the 1840s. They were also known for their close relationship with the indigenous communities that lived in the area. There were a number of interesting items at the homestead about the history of the family and the dam building process.

After our sight seeing Andrew and Aaron went off on a mountain bike trail that heads off around a path along some of the lake whilst the girls and I went to the pool for another swim and play with Pippa and Jesse.

We decided to stay an extra night at Lake Argyle to celebrate Bianca’s 5th Birthday! Bianca woke early on her birthday and was very excited to receive her birthday gifts and cards. We went for a walk to the lakes edge and swim in the lake, which was warmer than the pool!! 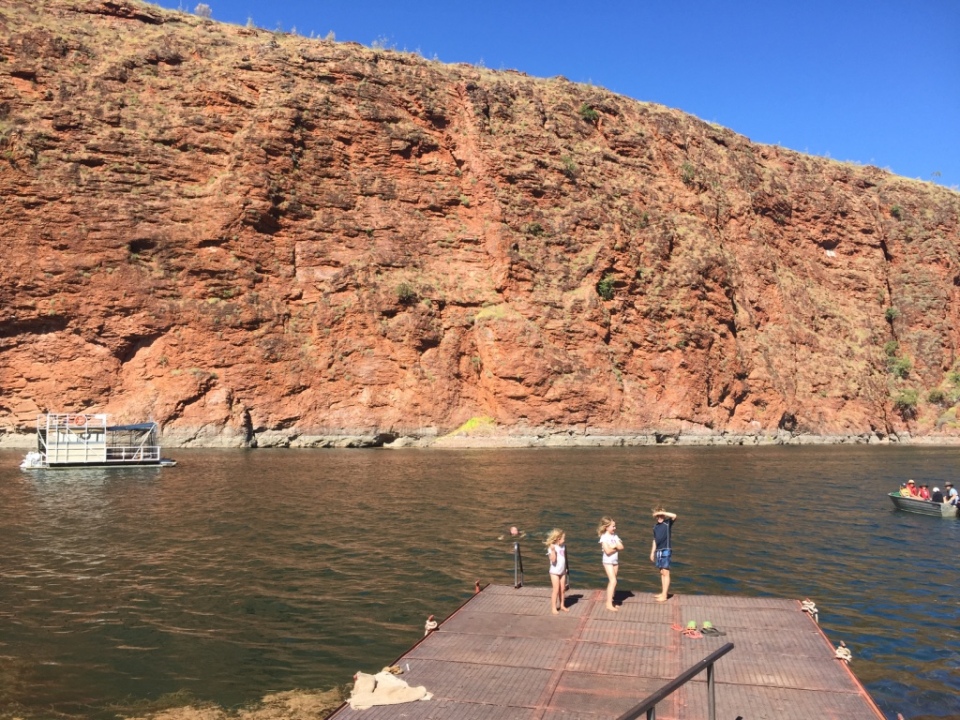 We spent some time decorating a cake for morning tea and sang happy birthday again and then at Bianca’s request it was back to the pool for more swimming. 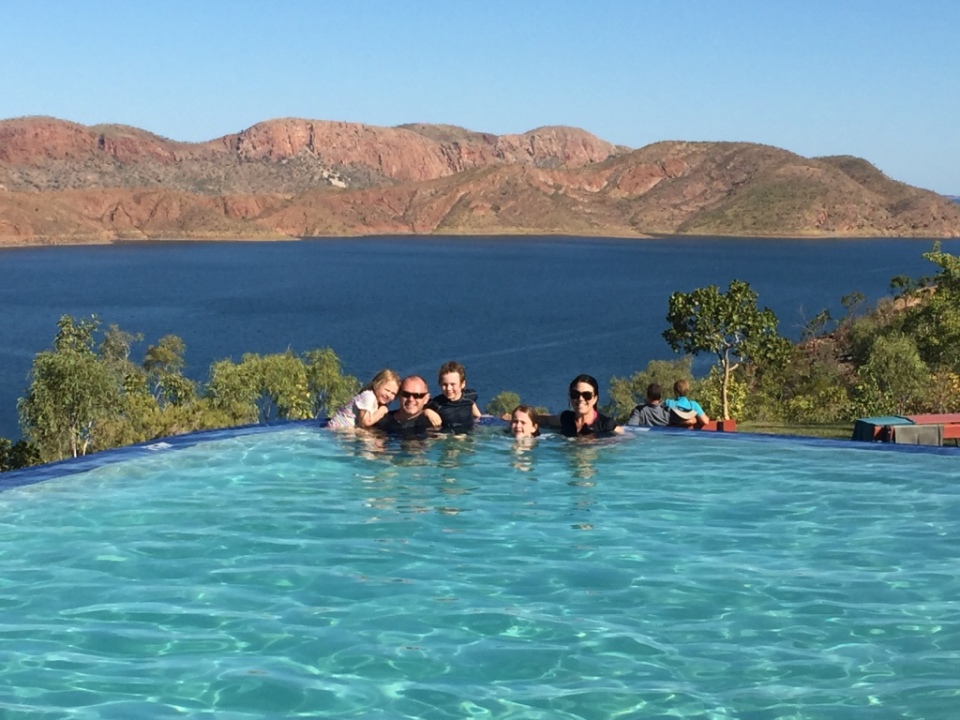 In the evening we went out for dinner and watched the entertainer Steve Case (the same guy from Kununurra) and he sang Happy Birthday to a shy Bianca when her cake was brought out to her. It was a lovely birthday celebration for our baby…now growing into a big girl! 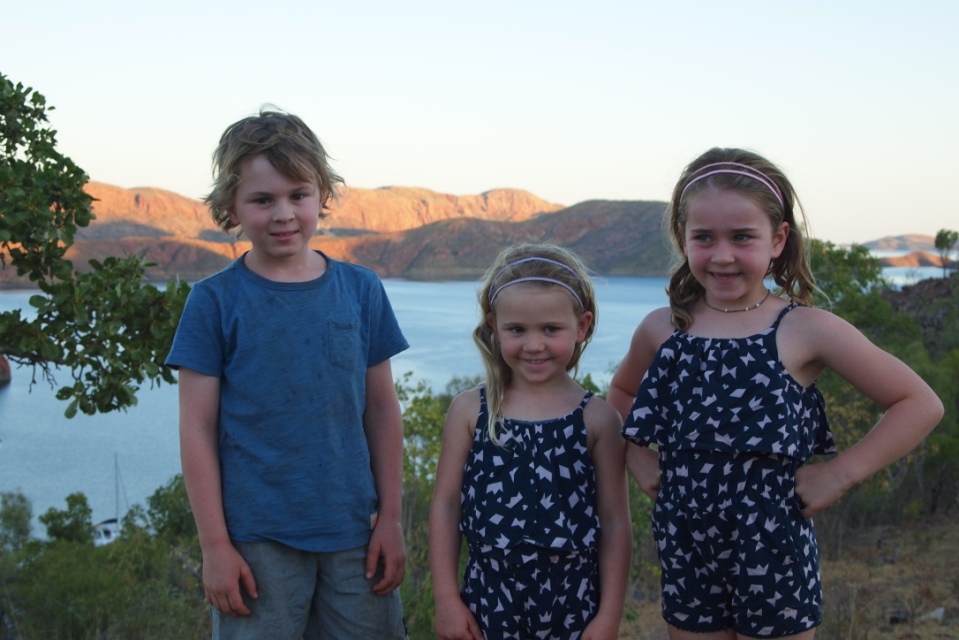 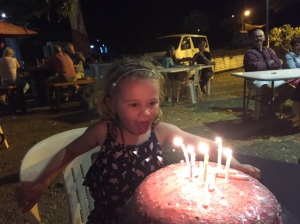 Aaron and the lake

We really enjoyed the visit to the lake and would definitely return it is so beautiful.